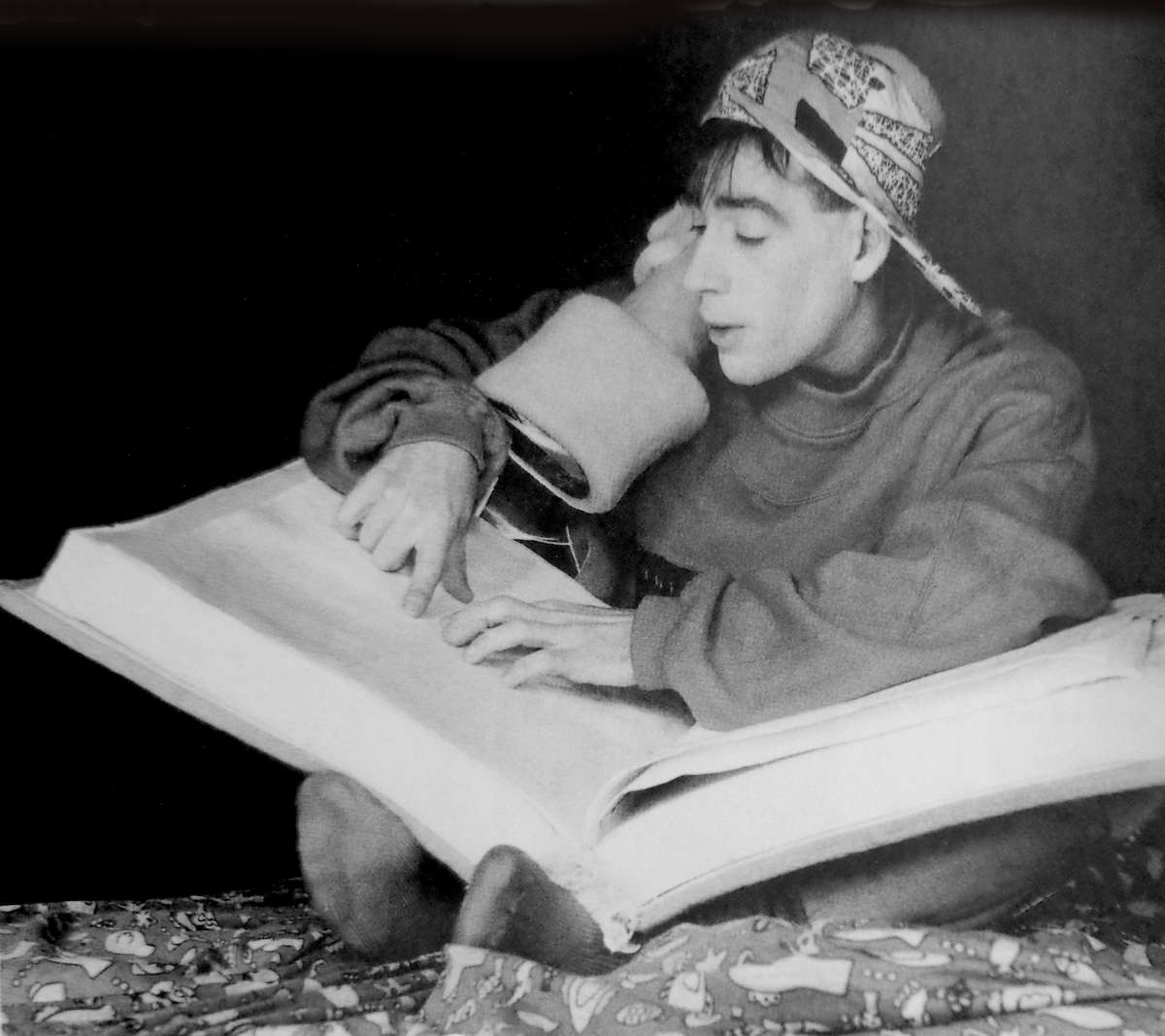 The Reading Boy Hugh Wayland, the Boy
Photograph: © Ponch Hawkes 1991
It's the magic of Handspan that makes it all work. Using the familiar devices of black light theatre, simple visual images and a highly mobile and very flashy robot, the story is a three-dimensional cartoon reminiscent of Maurice Sendak's Magic Kitchen.
Ewart Shaw, The Advertiser, Adelaide, 15 May 1991


THE READING BOY was created by Handspan based on a concept by Peter J.Wilson and developed while he was co-Artistic Director of the company in 1990. Peter was inspired by the Australian Paper Mill (AMP) at Fairfield, in inner Melbourne, where he regularly recycled his newspapers. Tossing them down a chute into a vast sea of newsprint and cardboard that was churned and mashed to pulp by the mill’s machines, he envisaged the location for a new play for young audiences.

The original idea was explored in a creative development workshop in 1989 with John Romeril who was commissioned to write the play with the company and composer, Boris Conley. Designed by Richard Jeziorny (staging and images) and Philip Lethlean (lighting) for in-theatre performance for primary school age audiences, it was originally directed by Peter J.Wilson for its premiere season at the Come Out '91 Festival in Adelaide.

THE READING BOY was the story of a boy who is entranced by his favourite book, Enquire Within About Everything and the wonders it reveals. He discovers the book has been accidentally thrown out in the recycling and determined to retrieve it, adventures on its trail through the newsprint pile at his nearby paper mill.

I opted for an encyclopedia, a book full of facts and sayings ... I thought a young boy who wanted to know everything, who loved learning things, was an interesting hero

John Romeril, A Word or Two From Writing Man, production program/flyer, 1993
The Crow on his rubbish bin
Photograph: © Ponch Hawkes 1991

The play followed a narrative text led by a larrikin Crow, who acted as ringmaster of the action, with the charm of a born raconteur1 . Throughout the play, the nine-year-old Boy, played by an actor, was enveloped in images and illusions animated in mixed puppetry styles - black theatre, shadow play, rod, glove and body/mask costume puppetry. Machinery and paper became fantasy characters - a rather jaded talking book and a flashy recycling robot - in a world where paper and words came alive in flurries and upheavals of newsprint.

The central relationship is between the boy and a crow who lives in a garbage bin outside the boy's bedroom window. The boy thinks the only information he is ever likely to obtain, comes from his book, but the crow helps him realise that isn't the case and that he will learn a great deal more if he reads more than one book.

So where does the crow come into the act? I admire the way certain Australian birds and animals have managed to survive in our cities. Possums for instance ... the notion of a city crow appealed. Somehow a friendly robot got into the act because increasingly work that people used to do is being done by machines. For better or worse that is somethine we all, adults and children, have to come to terms with.

THE READING BOY was generally well-received by critics and audiences:

Handspan's show is a novel, provoking and beautifully staged piece of youth theatre.

Romeril has a point or two to make about the need for young persons to read widely and critically, and not take everything they find in books at face value. But no youngsters (or their teachers) need fear they are being preached at. This is primarily an entertainment that uses the techniques of puppetry and theatre to create a childhood world of illusion.

I really enjoyed your play you did on Reading Boy. I would love to know how you got Reading Boy to fly with crow?

I thought it was fabulous and the bit I liked best was when he nearly got hit by the car when the lights flashed on because the crow flew the boy to the re-cycling shop. I wrecken it was great Mr Wilson.


The production's creative team received positive accolades, as did the cast, particularly, the Crow (John Rogers), but some some reviews were tempered with criticism of the play itself or elements of its staging:

The story was so well told by the visual progressions that much of the dialogue was rendered superfluous. The definition of the moral at the end was unnecessary as the audience had grasped the meaning from the tale and further clarification hung like an adult reprimand.

This otherwise excellent show gets pulped in sprawling scenes of pulsating piles of newsprint at the paper mill.

In 1992, Jon Stephens directed the production with some new cast members for touring the Out of the Box Festival in Brisbane and Queensland regional towns in 1982, and again for a season in Canberra in 1993. In Canberra, although dwarfed by the large venue, the production was critically recommended despite some continuing commentary about uneven connections between the elements of the work.

What makes this hour-long production memorable, is the visual effects orchestrated by the Handspan puppeteers ... the Reading Boy is rather wooden in the opening scenes. However he literally "takes off" when he sets out to find his favourite book. The show is recommended for older primary school children but the visual effects from the animated pile of newsprint to the Reading Boy flying through the air, will engage the attention of even younger children. 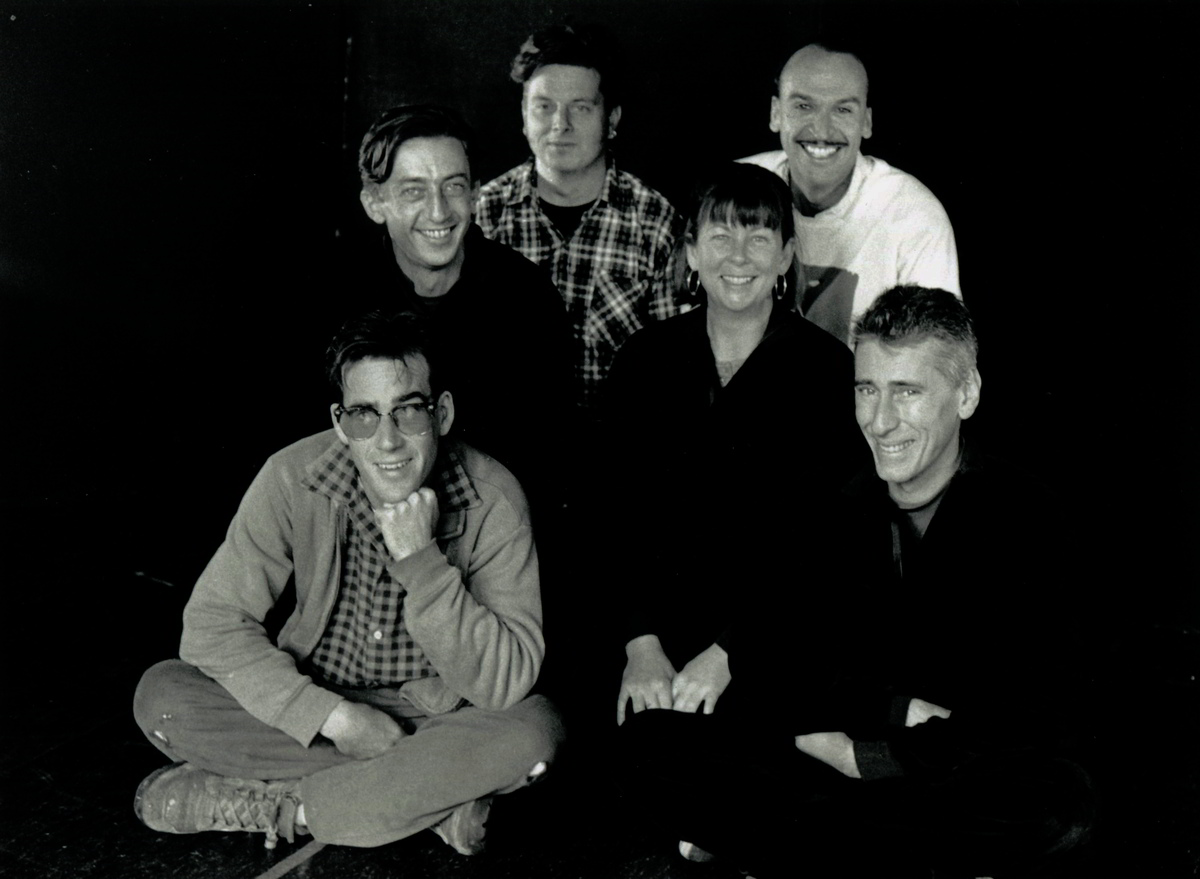