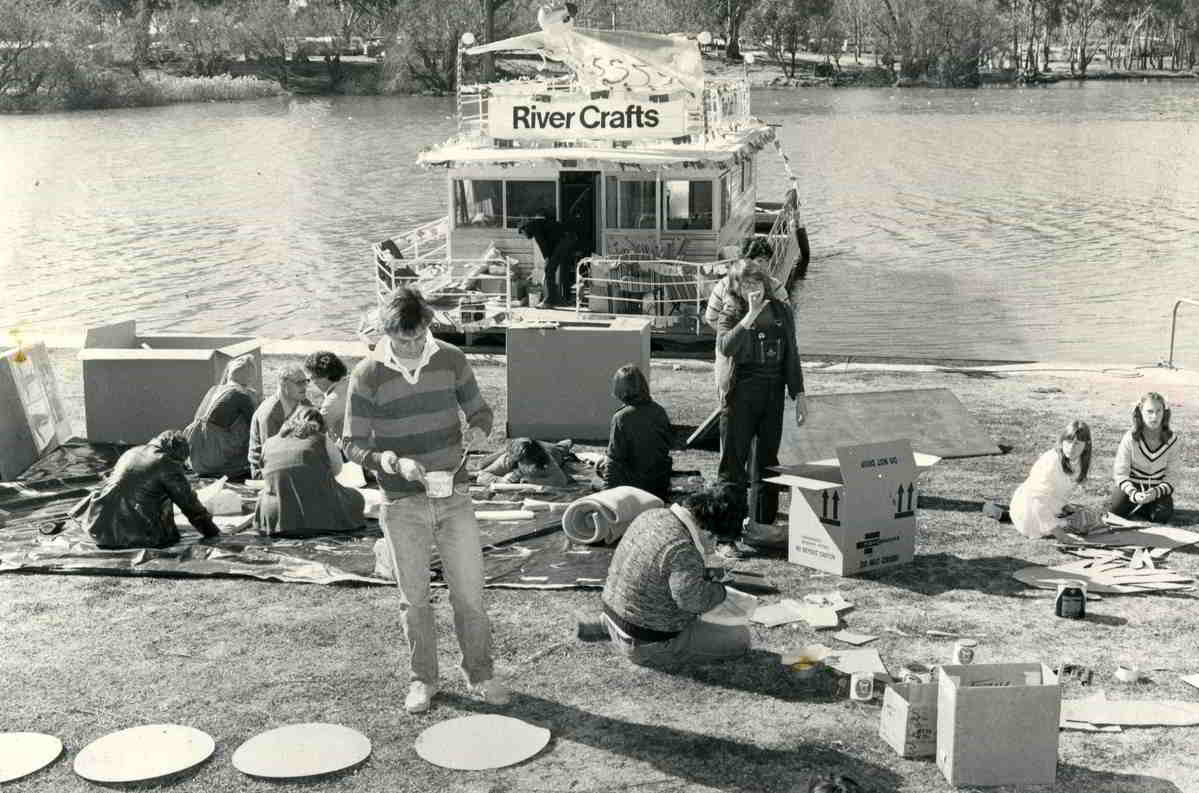 
RIVERCRAFTS was the brainchild of Gwen Stainton, Community Arts Officer from the Mildura Arts Centre, and Greg Temple, an American puppeteer living in Adelaide, South Australia. Gwen had long been keen to use Mildura's iconic location on the river in arts projects as she explained:

The main purpose was to involve as much of the community as possible - including townships from both sides of the New South Wales/Victoria border.

Hearing of the project in early 1978, Handspan invited themselves to participate in the project as assistants to Greg, and, when accepted, Helen Rickards and Ken Evans joined the RIVERCRAFTS team.

The three-week long project was conducted from a houseboat on the Murray River which accommodated the team, Greg, Ken and Helen, and young local artist, Linda Stainton, and was their workshop base, moving up and downstream from Mildura to Wentworth and Renmark. Daily workshops were held with primary school students on the riverbanks of small towns en route.

The project proved to be a stimulating and successful partnership between all involved. Greg introduced Handspan, as well as the students, to his simple and effective foam carving techniques for puppet construction, and Ken and Helen added new dimensions to his workshops creating dramatic improvised performances and visually integrated processional imagery with participants. The river, its flora and fauna, local characters and issues appeared in stories and innovative processional tableaux from enthusiastic students and teachers, expressing their world with extraordinary objects.

Part of the Arts Victoria '78 (Crafts) Festival, the first RIVERCRAFTS project took the theme River Life and invited students to represent their local environment and issues in images and stories.

Basically it's a craft project, plus an introduction to theatre in general, and storytelling. We're trying to get them to think about the theme and the characters, and carving and building them into actual performance through rehearsal along with sound effects and voices. Having them experience this, along with the festival, which will have 200 puppets, will get them to go back and teach others


RIVERCRAFTS '78 travelled the Murray from Mildura to Renmark in one direction and Wentworth in the other stopping for workshop days with communities in between on both banks of the river, Gol Gol, Dareton and Wentworth in New South Wales; and Karadoc, Red Cliffs and Merbein in Victoria.

On board: A troupe of wandering players, strolling on the water. Puppeteers to be exact. Riding their rhythms all the way from Red Cliffs to Wentworth up where the Murray meets three States, visiting isolated communities, stopping for schoolchildren, 80 kilometres in a fortnight. Every day the kids have come with themes based on the river life, such as pelicans, Aboriginal life, pollution, 'The River of Life in the Land of Plenty', events to make them more aware of the mighty Murray.


The event culminated in a public festival: a procession through the streets followed by a showcase of students' puppet plays on the Mildura Rowing Club Lawns. In a grand finale, a flotilla of rafts made by each school and peopled by their puppets, was launched. The rafts were borne upstream by the flagship houseboat, as a large balloon, dangling model cut-outs of the Rivercrafts team, led an 'all school' balloon release.

Riverboats travel slowly and in winter, the daylight hours short and chilly so the venture had some discomforts - often involving sandbars and mud in the river - but it was a rare experience with exciting outcomes. All involved were keen to repeat and enhance the project in the following year 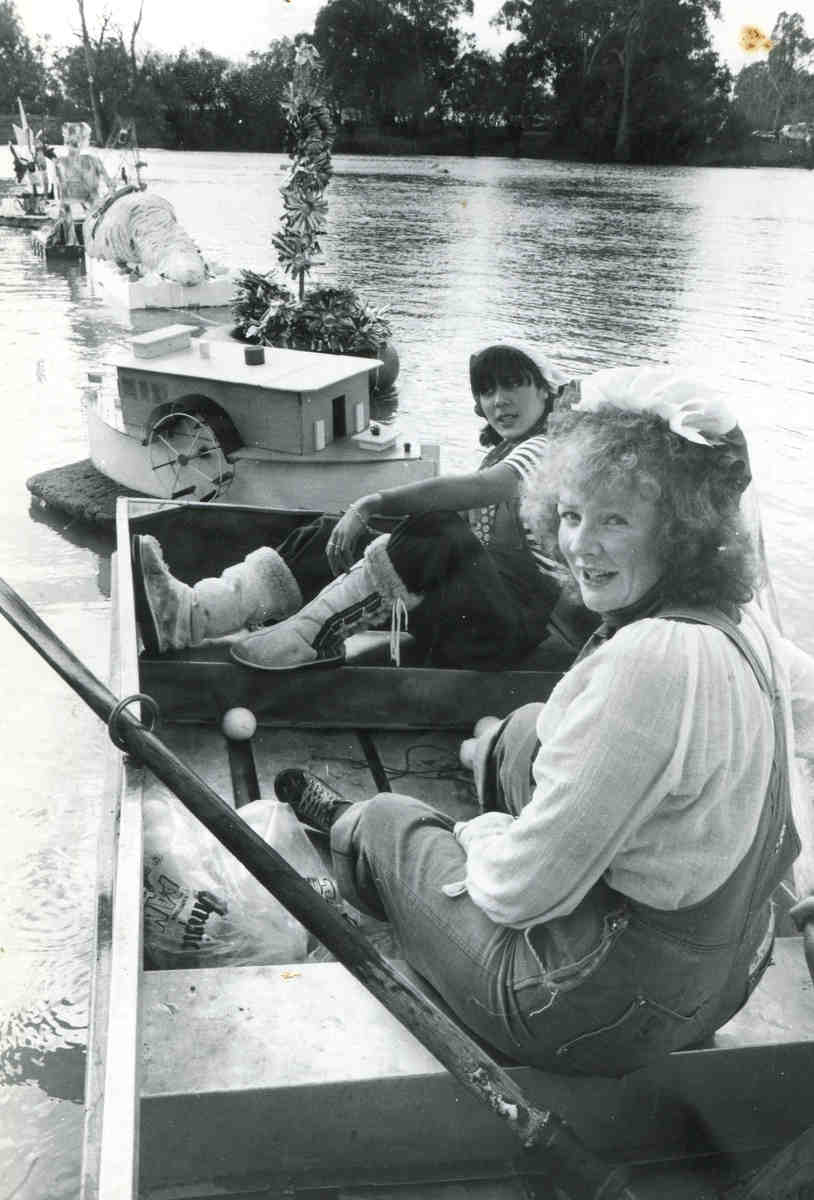 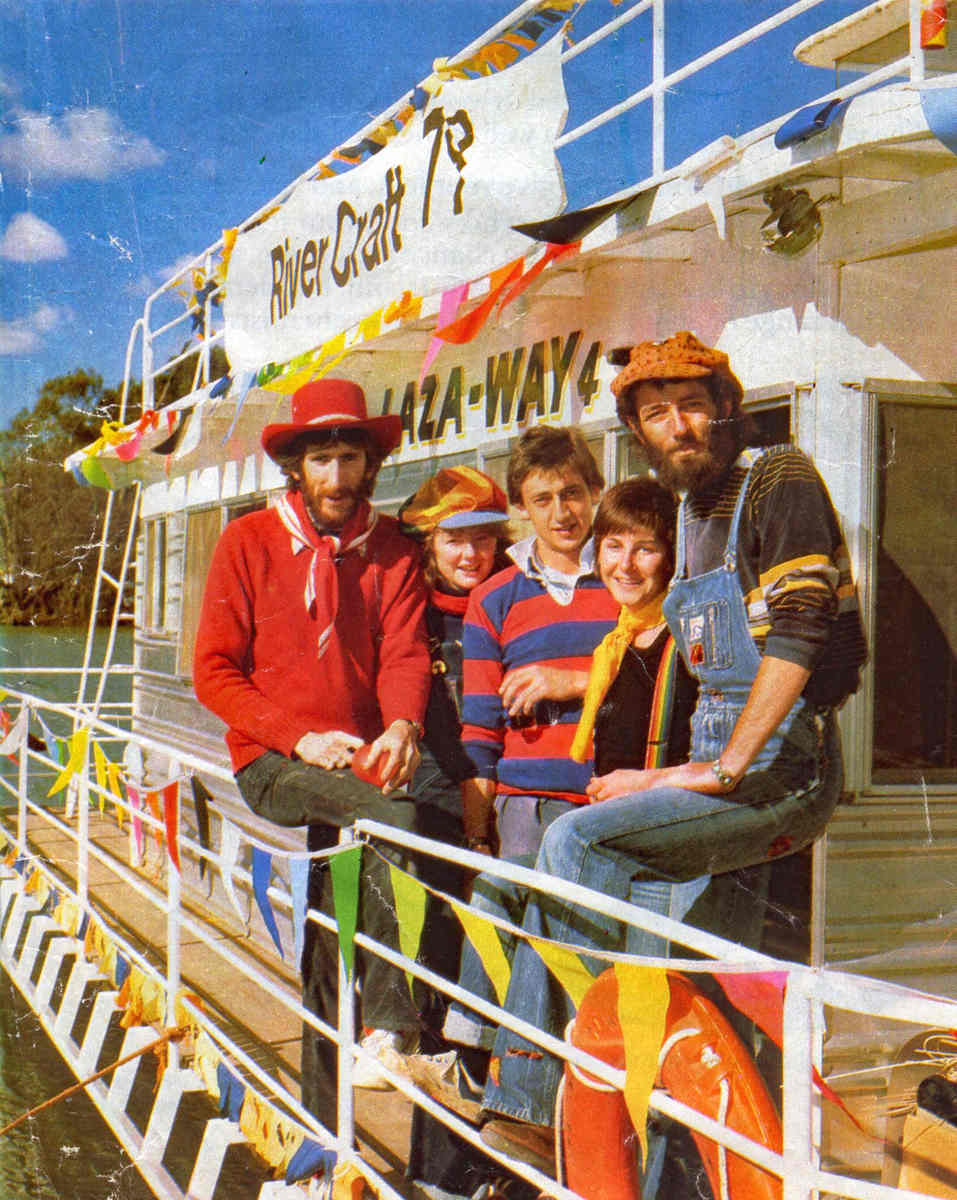 The second year of the project was again collaboratively led by Greg, Linda, Ken and Helen joined by John Rogers. It added a rainbow theme to the project – schools devised their imagery and storylines created around a theme of ''Multi-nations" - each group restricted to one colour of the spectrum in their imagery.

This being the 'International Year of the Child' we want to point out not only the 'differences' we can all learn from each other, but also the similar characteristics we all have in common - whether it will be Blue, Yellow, Purple or Potato.


Each group again created both short puppet performances, and collectively each school built large processional images to represent their local icons for inclusion in the final day street parade. The parade, devised by Ken and Helen (Rivercraft Parade Plan 1979.), stretched a town block in a rainbow ribbon. It was led by Greg’s early experiment with air-filled images: a giant multi-coloured gnome. As in 1978, the Mildura Lawn riverbank became a performers’ circle where all exchanged showcase presentations of their work after the procession.

The parade included a friendship display of giant hands and two enormous Murray River cod with rainbow fins. A child dressed as a tree wandered blindly away from the parade. There were pelicans, crows, an octopus and an enorous rainbow serpent. The procession was an animated rainbow - the schools arranged in their colours as they marched. A 'balloonaversal' gnome, 4.5 metres high and made of gaily dressed weather balloons, led the children to Mildura's rowing club lawns. 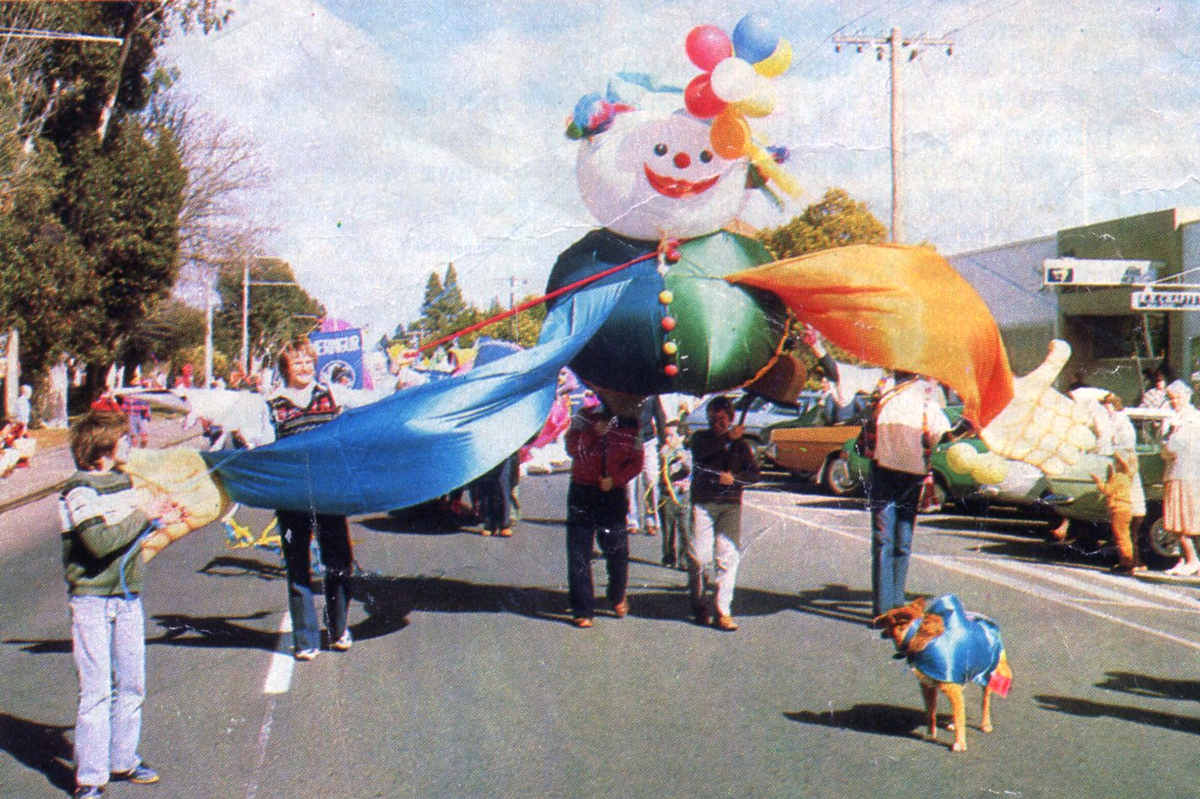 Rivercrafts '79: The Rainbow Parade led by a large friendly gnome


In 1979, participating schools and communities were closer to Mildura along the Riverbank and included Mildura Technical School, Christie Centre Special School, Dareton Primary, Buronga Primary, Gol Gol Public, Sunnycliffs Primary, Colignan Primary and Koorlong Primary Schools. The crew had another pair of hands on board to lead the daily riverbank puppetry and performance workshops.

Muddy feet and cold river water nothwithstanding, in the two years, six weeks of winter outdoor workshops and presentations beside the river were never rained out!

Participation in RIVERCRAFTS was a significant influence in Handspan’s artistic development confirming the fledgling collective’s belief in the power and impact of animated visual imagery on the streets; its accessibility as a tool in drama and play-making with students and communities; and the creative excitement of one-off community performance.