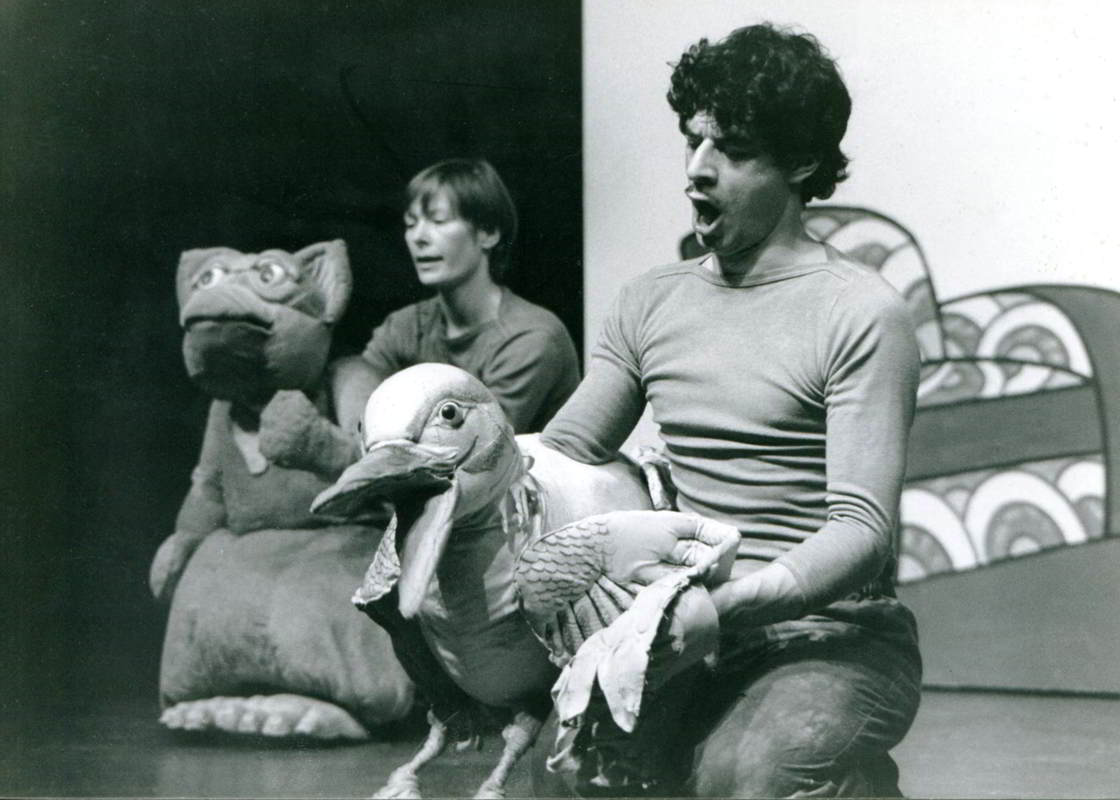 Bombora: On stage, Digga, (Katy Bowman) and Stan, (Frank Italiano)
Photograph: © Cathy Konig, 1982
Bombora: to board riders, the huge, far-out unattainable wave; for the Aborigines the word describes the water beyond the farthest breaker. Handspan and Mushroom combine both these meanings.
Jill Morris: The Age, 9 March, 1982


BOMBORA was a co-production between Handspan Theatre and The Mushroom Troupe, both independent touring troupes performing for young people and community audiences based in inner metropolitan Melbourne.

An in-theatre show for young, primary age audiences, BOMBORA followed Jandy Malone and the Nine O'Clock Tiger, Handspan’s first work devised for in-theatre performance rather than versatile ‘go-anywhere’ touring. Alison Richards, Artistic Director of Mushroom proposed the partnership between the companies after seeing JANDY… at Carringbush Library in 1981, and following the success of Mushroom Troupe's own in-theatre plays, Ace (1981) and Flying Heroes, (1982).

BOMBORA was written and directed by Alison Richards and composed by Faye Bendrups from Mushroom; and produced by Helen Rickards, designed by Ken Evans with puppets made by Michele Spooner from Handspan. Both companies shared creation and costs of producing the work. Co-presenter, Phil A'vard at the Alexander Theatre, Monash University, contributed to the show’s pre-production costs and facilitated its touring circuit in outer metropolitan Melbourne and regional Victoria, where it played for primary school audiences and family audiences in the school holidays. 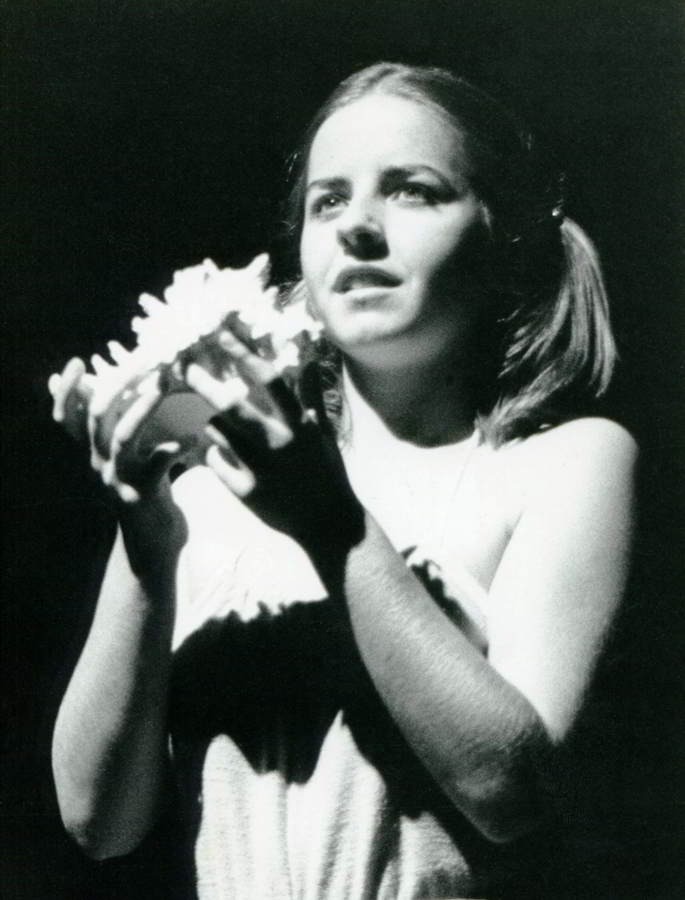 In the play, this oldest wave in the world sleeps nine kilometres down in the sea until it is awakened by the person who possesses its blue heart. Maxie possesses the heart, but must first learn to truly see with her eyes and hear with her ears before she can unlock the secrets of the sea.

The production's narrative was told in dialogue between puppet characters, with visible manipulators, and ten-year old Maxie, played by actor, Michelle O'Grady.

An imaginary journey in a real world, BOMBORA aimed to mix odd creatures with the fantasy possibilities of the mythical wave. Alison Richards described its format as:


The story follows Maxie who turns away from her Mum, (portrayed by a pair of puppet thongs), and her Uncle Ron, (a beer-belly), when she meets new friends on the beach.

These companions, puppet characters, Stan, the rude Seagull and Digga the Dumyup, described as 'a cross between a Tasmanian Devil, a possum and all sorts of things - Australia's last undiscovered animal' help Maxie overcome her fear of the bush and the dark. They lead her quest to meet Cowfish under the sea and there, to conquer her fears of an unknown environment. Only then could she be taken into the heart of the wave: an animated parachute-silk construction that billowed, tsunami-like, over the stage to lap at the edge of the audience as the show came to an end.

BOMORA was Handspan's first attempt to collaborate on a new play written specifically to be staged with puppetry and visual effects rather than an ensemble created work modified according to the performance possibilities and limitations of its images.

The company began work with Mushroom once the script for the play was in its final draft and although Handspan designed and built the production the company did not really engage in further collaborative development of the text or its concept.
.
BOMBORA's text required its key puppet characters to sustain anthropmorphised movement and dialogue rather than to colour in the text with action. The key puppets, operated by squatting manipulators moving in a Takeshi shuffle1 proved cumbersome and inflexible. The play's design, on an open stage with a blue cyclorama backdrop, effectively conjured the sparse blue landscape of an Australian beach, but its openness also limited its visible puppeteers' capacity for adventurous and magical illusion.

Both companies were inexperienced in the dynamics of collaboration, and neither were entirely satisfied by the outcomes of the experiment. The separation between Handspan's workshop in Fitzroy where the production was built, and Mushroom's rehearsal room across town in the western suburbs, was a key inhibitor to the joint development endeavour.

Reflecting on the project in 2016, Alison Richards recalled that she had expected more from the partnership. However, in her position as both writer and director she, with her long-term colleague Faye Benrups, composer and musician, were held in some awe by Handspan participants, who did not communicate their own knowledge of the possibilities and limitations of puppetry well in the partnership. When all came together for the first time to bump-in and rehearse in situ at the Alexander Theatre, missed opportunities for artistic negotiation to achieve everyone's original dreams became apparent.

Some of its dialogue is offensive. No parent packing little five-year olds off to see a childrens entertainment would want to be exposed to the Australian word for an outback toilet!


Audiences generally giggled at the 'dunny' reference, and no letters of complaint were ever received by Handspan or Mushroom.

1 Puppets were operated by squatting puppeteers controlling their adapted bunraku puppets from behind and using their knees to shuffle them along as they moved. The manupilation method had been introduced to Australian puppeteers by Master Puppeteer, Takeshi on a cultural exchange project from his company, Puk Puppet Theatre, in Japan, to the Tasmanian Puppet Theatre, in the late 1970s. Both Frank Italiano and Katy Bowman, puppeteers in BOMBORA, had been trained in the method at the Tasmanian company where they worked until its closure in 1980.
Scroll back to Click Tabs: The People & The Performances