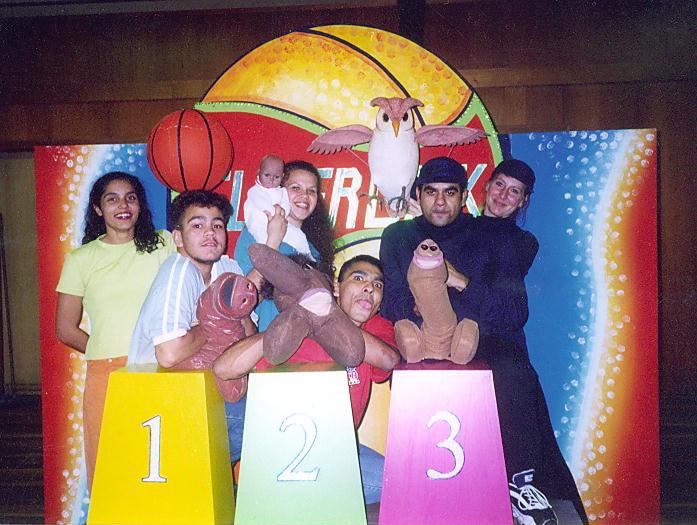 
SLOW DOWN CUZ was created by Handspan with the Victorian Koori Health Unit for adolescent audiences after the success of their previous co-production, The Kangaroo Tale (1995) in primary schools.

The play followed the same characters that had been introduced in The Kangaroo Tale, Nindara and Jenali, who with Shove and Brandy, are now grown into teenagers and transported from the Dreamtime into contemporary Aboriginal society. Its themes again explored youth sexuality but in SLOW DOWN CUZ, they were directly focused on the possibilities and perils of STDs, teenage pregnancy, substance abuse, peer pressure and life's choices.

Puppets and animated objects became a Chorus for the play sometimes portraying the Gods of the Dreamtime and able to represented taboos and awkward topics - penises, condoms and STDs in comic scenes that revealed the teenagers thoughts and concerns.

The play was very clever. Everyone was very impressed with the modernised use of the Greek chorus, the wise owl being the Ancestor and the authentic dialogue. The sparse but effective use of props was brilliant and Handpsan Theatre's puppeteers were magnificent - their skillful manipulation of the penises in particular was really hilarious and help to send the message home about safe sex


For Handspan, the production was the last in a quartet of theatre-in-education works written by Gilly Farrelly that focused on these issues: We Repeat Ourselves (1989); Lunatic Soup (1991); The Kangaroo Tale (1995) and Slow Down Cuz 1997. The plays were researched with the communities who became their audience, offering Handspan artists extended opportunities to create collaborative research-based theatre and in the co-production with the Koori Health Unit, in-depth cross-cultural exchange experience.

Handspan and the Koori Health Unit were supported by Special Funding from The STD Blood Borne Virus Program which involved collaboration in all aspects of the work. Joanne Dwyer from the Koori Health Unit was Assistant Director for the production and the cast included cast of 4 young actors were drawn from Victorian indigenous communities in Echuca, Sale and Melbourne. The project offered these young performers opportunities to explore topical material and collaborate in creating a production about personal and relevant issues for their peers . At the same time the work's five week-long development and rehearsal residency in Melbourne and subsequent three week tour offered, otherwise rare, professional work experience engagement for young and emerging indigenous artists.

According to reports, SLOW DOWN CUZ achieved unprecedented acceptance in the communities where the play appeared.

What a privilege to catch this performance ... I was amazed to watch a rowdy audience of young people listen and value the performance with the respect due to it

I really enjoyed it. I especially liked the way the actors told us about getting into difficult situations and how not to be pressured into doing something we don't want to do