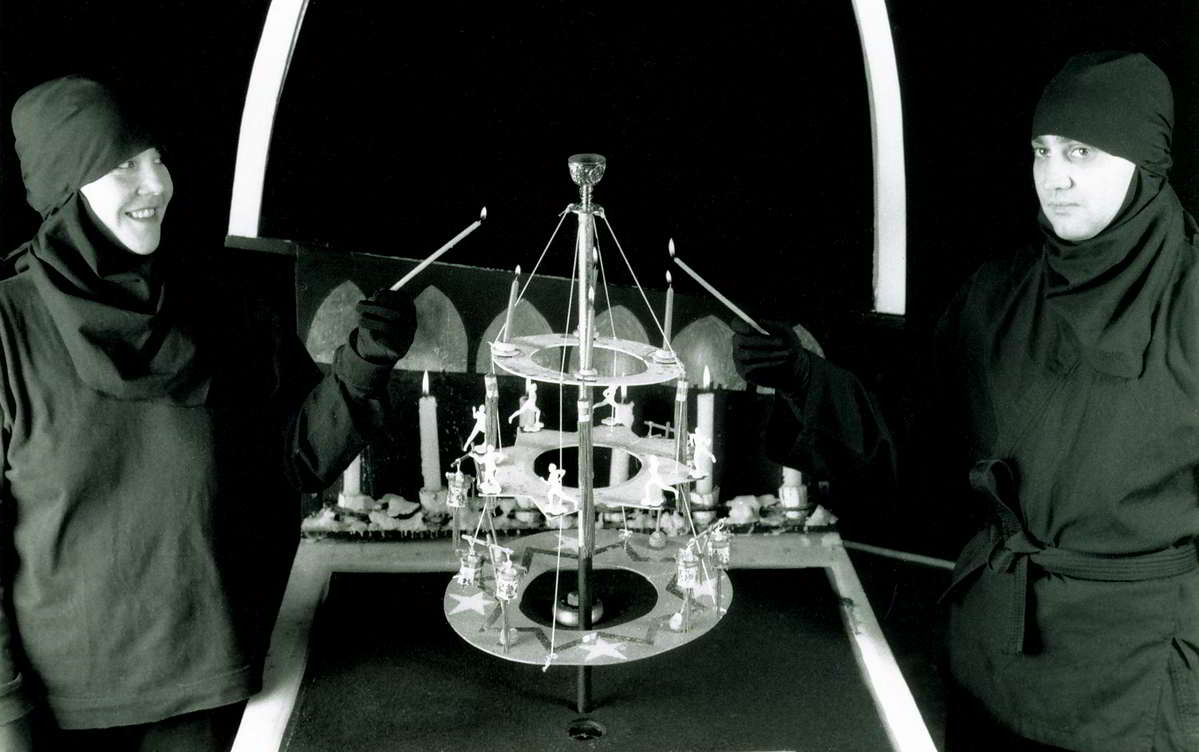 The objects are all vaguely significant ... and none of this comes together in any way you can make sense of, but the total effect is so beautiful to watch it doesn't seem to matter.


NO RIGHT ANGLES IN PARADISE was devised, designed and directed by Ken Evans and originally produced by his company SLAVE TO THE IMAGE in early 1989, supported by an Individual Grant from the Australia Council for the Arts for its development.

Created to explore the magical arts with puppetry illusion and black theatre in a collaboration between Ken and Melbourne magician, Sam Angelico, it was Ken's first independent work, developed during a breather from his full-time Handspan commitment after 12 years work. It was nevertheless developed from the outset with Handspan artists, puppeteers, Michele Spooner and Winston Appleyard and dramaturg, Gilly Farrelly.

In 1991, the play was absorbed into Handspan's repertoire and adapted to tour with the company's vignette production Women Alone.

The title was inspired by ideas of Paradise:

A place where time stands still ... the state in which heaven is so close to earth that it can be reached by climbing a tree.

In Paradise, nothing is ever 'wrong', or 'as it seems'.

These metaphoric definitions informed both the production's conceptual development and its design interpretation.

Black art magic and black theatre puppetry - ancient theatrical forms which cloak backdrops and puppeteers in darkness so that thin shafts of light reveal only the puppet moving seemingly unaided.

NO RIGHT ANGLES IN PARADISE tells the story of a puppet apprentice whose naivety and open-hearted nature is confounded by his master, the Magister. The young apprentice, eager to understand the world and acquire knowledge, is confronted by the darkness of his master's belief that ultimately, there is 'nothing to know'.

Sam Angelico as the Magister commands the stage and wills it to life.
Click photos to enlarge 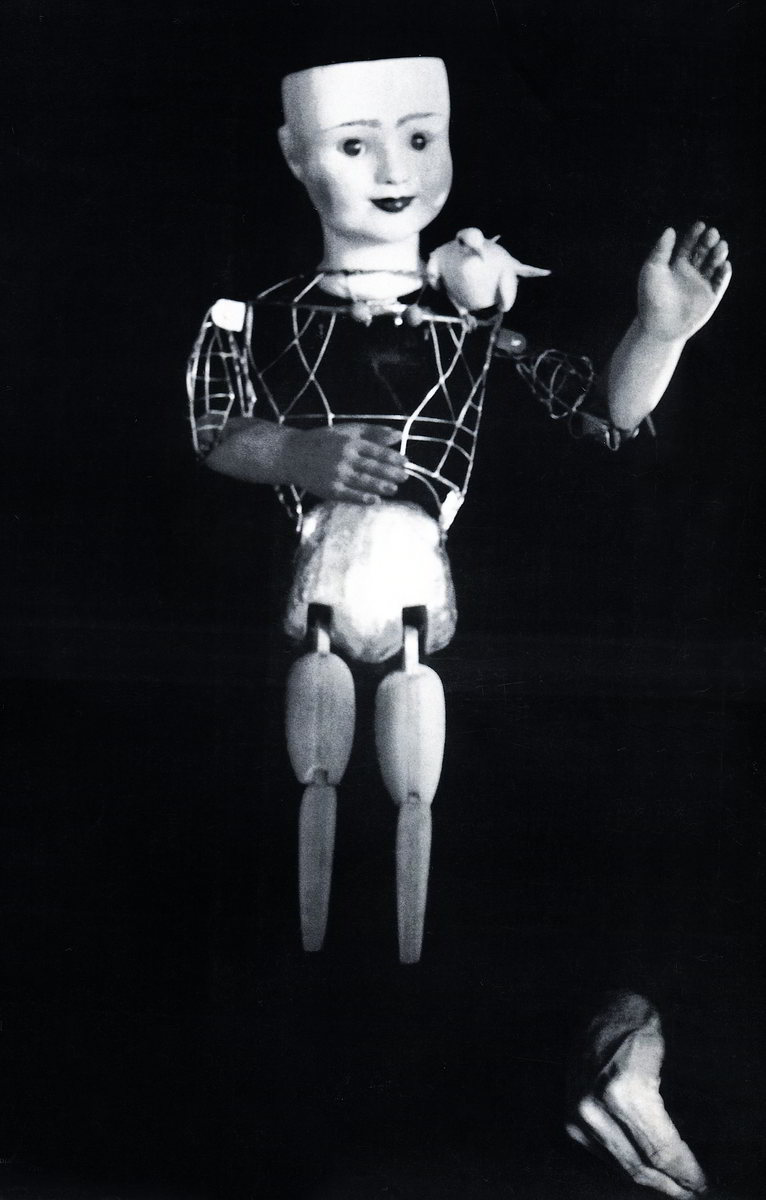 The story evolved out of the ideas of game playing and rituals, and the passing on of knowledge. Although the Magister sounds sinister, Evans insists that he is really a 'good guy' and that a pivot of the play is the father-child relationship. He teaches the boy about love and imagination. The are a lot of questions ... but the story resolves itself and I think it gives some answers.


Sam Angelico, a professional magician for over 20 years, shared the stage with Handspan's puppets, softening his well-known magician character with its demonic cackle for a more compassionate side ... he opened the performance by conjuring two of his doves out of thin air and setting then on ornate columns that flanked the stage.

Sam saw the work as a simple story about a magician and his apprentice and thought of the puppet as a real boy, growing and changing during the play ... we were going on a journey together.


The play's simple staging of short scenes performed with miniature bunraku objects, rod puppets and 'robotic wizardry' 1 was both moving and exquisite to observe. The delicately manipulated small objects were a stark contrast to the abrupt and sudden dark trickery of the magical illusions. The boy apprentice had an endearing face on an empty, wire-frame head, in which he carried the symbols that he earned in his encounters with the Magister. Gradually, as the child's head filled, it began to reflect his master's own intricate headpiece, which swirled and sent out flammable ticker-tape whenever the master had an idea. 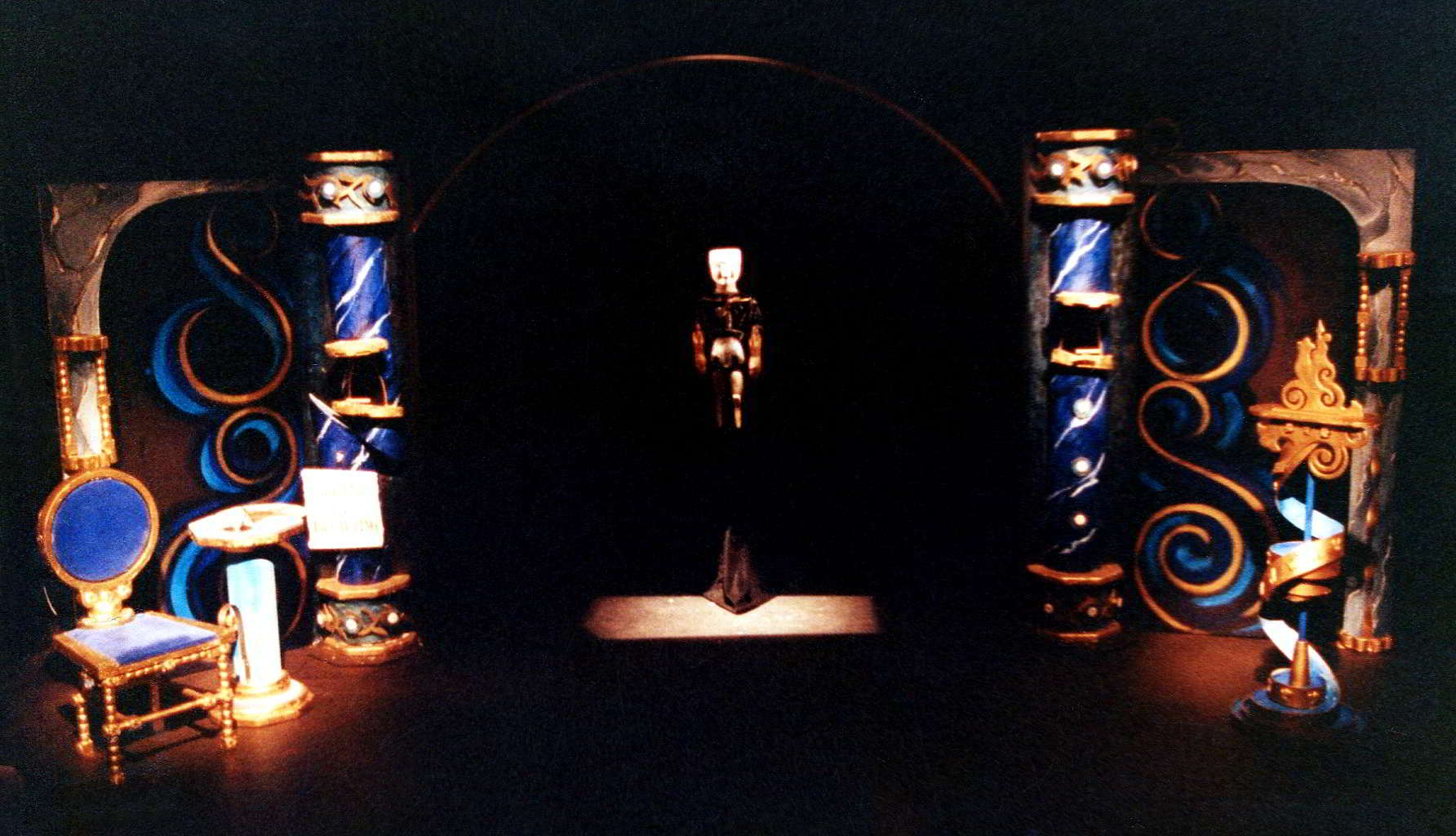 I live in the vain hope of seeing the perfect black theatre puppet illusion. 'No Right Angles in Paradise' goes close to that ideal ...a beguiling blend of black magic and puppetry. The high point of the production is a miniature puppet show ... the tiny dolls are manipulated with such expression they almost come alive.

A show which well earns the right to be placed in the Adelaide Festival's oddly named 'visual theatre' section.


In 1992 when Handspan toured the production in a Japan-Australia cultural program the company not only presented the work but used it as stimulus for artist-led exchange workshops.

I really want you to know how much we enjoyed having you as one of the participants of the Kawaguchi Festival. It was a great opportunity for us that we could produce such a nice relationship with many Australian artists through all the works we have created together and all the performances you have shown us.


The Festival performances in Japan were the production's final season. Sam's engagements as a solo magician made the project with the Handspan ensemble financially unviable for him, and his magical mastery was irreplaceable. At the same time Handspan had appointed a new Artistic Director, from outside the company membership, David Baird, who was keen to explore his own projects. 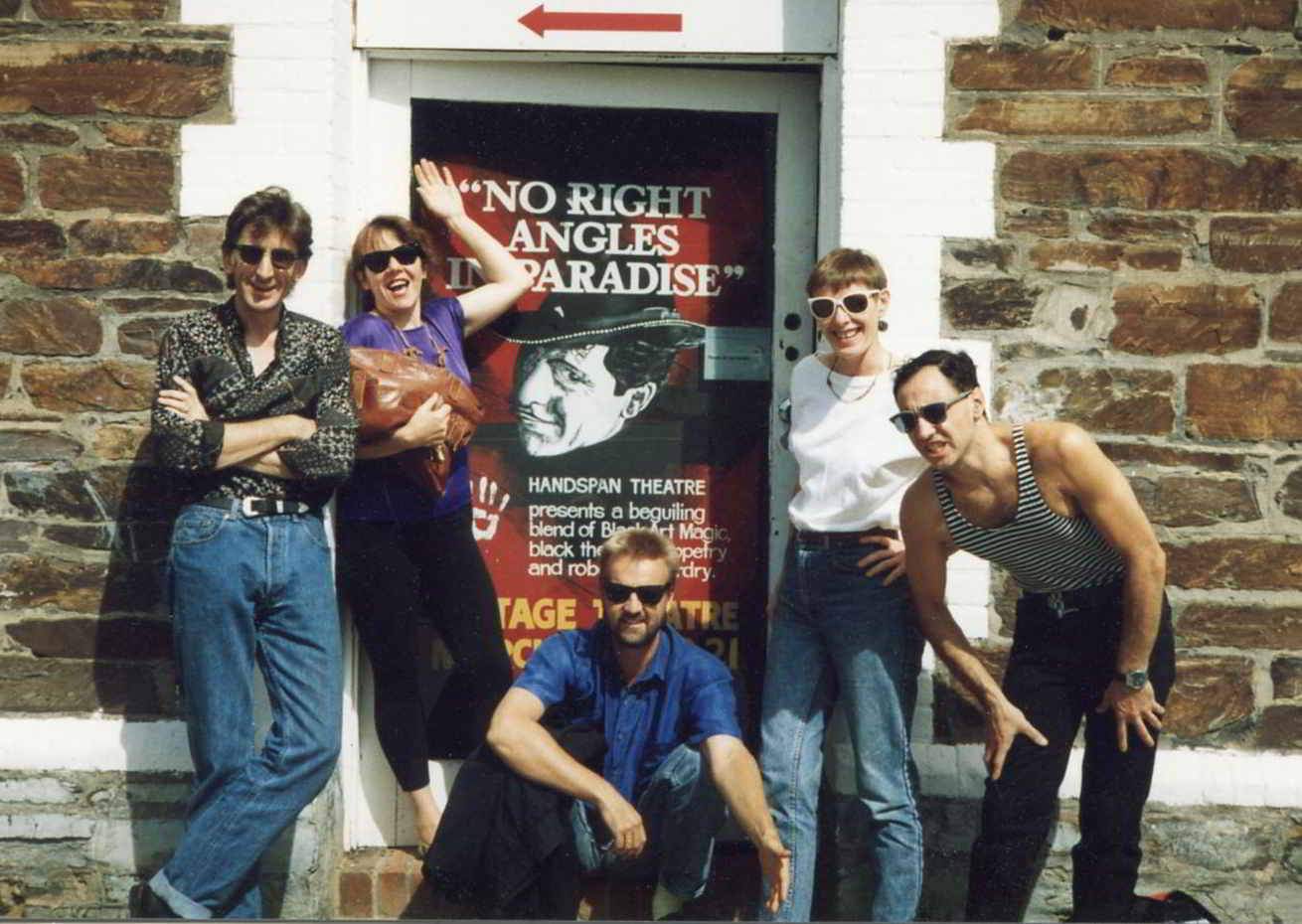