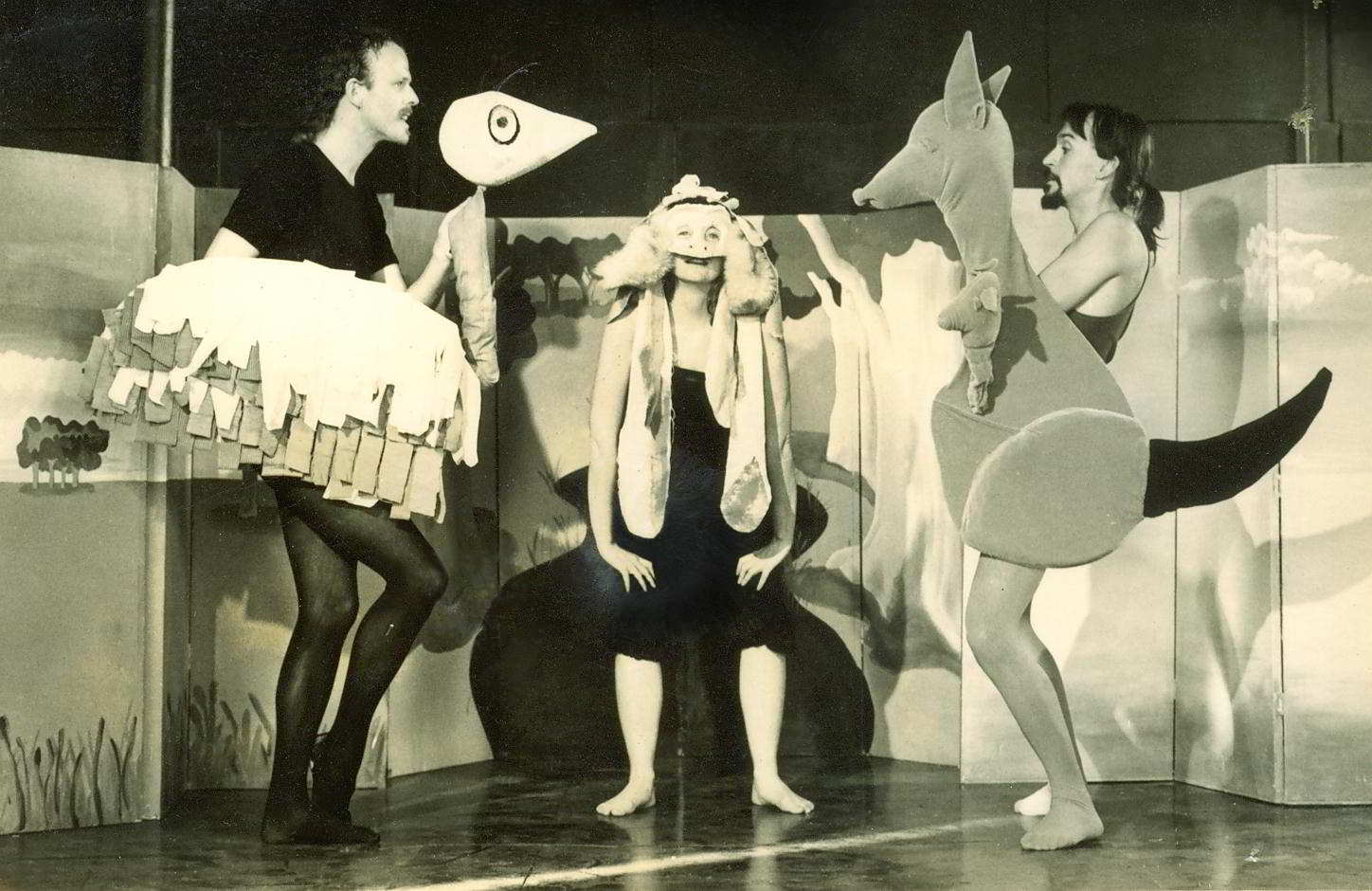 
From left, Andrew Hansen as Emu, Helen Rickards as Bunyip and Peter J.Wilson as Kangaroo

Photograph © Jon Conte, 1980
I was happy to see you doing such an original type of program. It was grand to feel you really loved the children from the very beginning when you chatted to them... that small girl's utter delight when she made the emu find worms.
Joan Rayner, Australian Children's Theatre1 , 18 November, 1980

THE BUNYIP OF BERKELEY'S CREEK was Handspan’s first non-commissioned work. It followed the success of The Mouth Show with primary school audiences but was created to play to general public audiences at local and community events – indoors and outdoors – as well.

THE BUNYIP OF BERKELEY'S CREEK adapted by John Rogers and Tony Rickards followed Jenny Wagner’s storyline closely. The Bunyip appeared from his muddy creek, asking all who pased by: “who am I?”. Raucously laughing at him, the Kookaburra pointed out that he had feathers; the Platypus identified his fur; the Emu and Kangaroo squabbled over his tail and running ability; and the doctor wouldn’t listen. Fortunately for the increasingly woebegone Bunyip he met another of his kind and a happily-ever-after conclusion ensued. 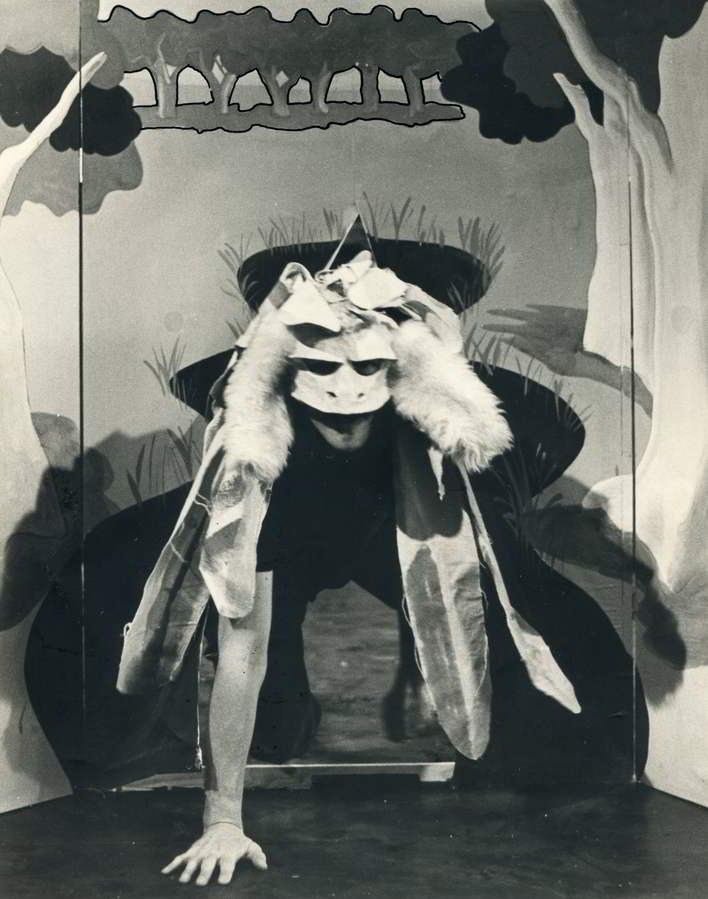 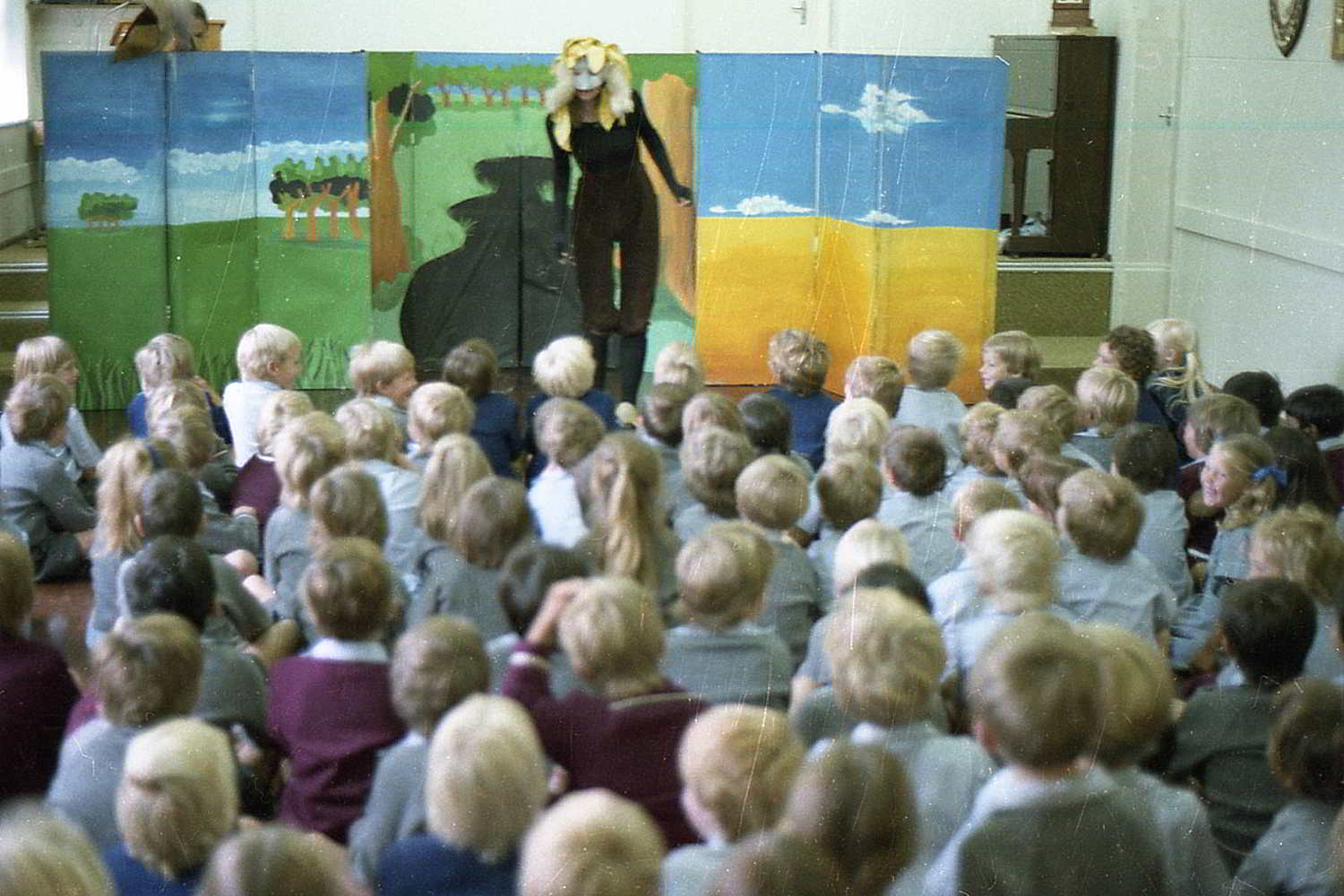 Another bunyip (Helen Rickards) asks the audience 'Who am I?'
Company snapshot, 1981 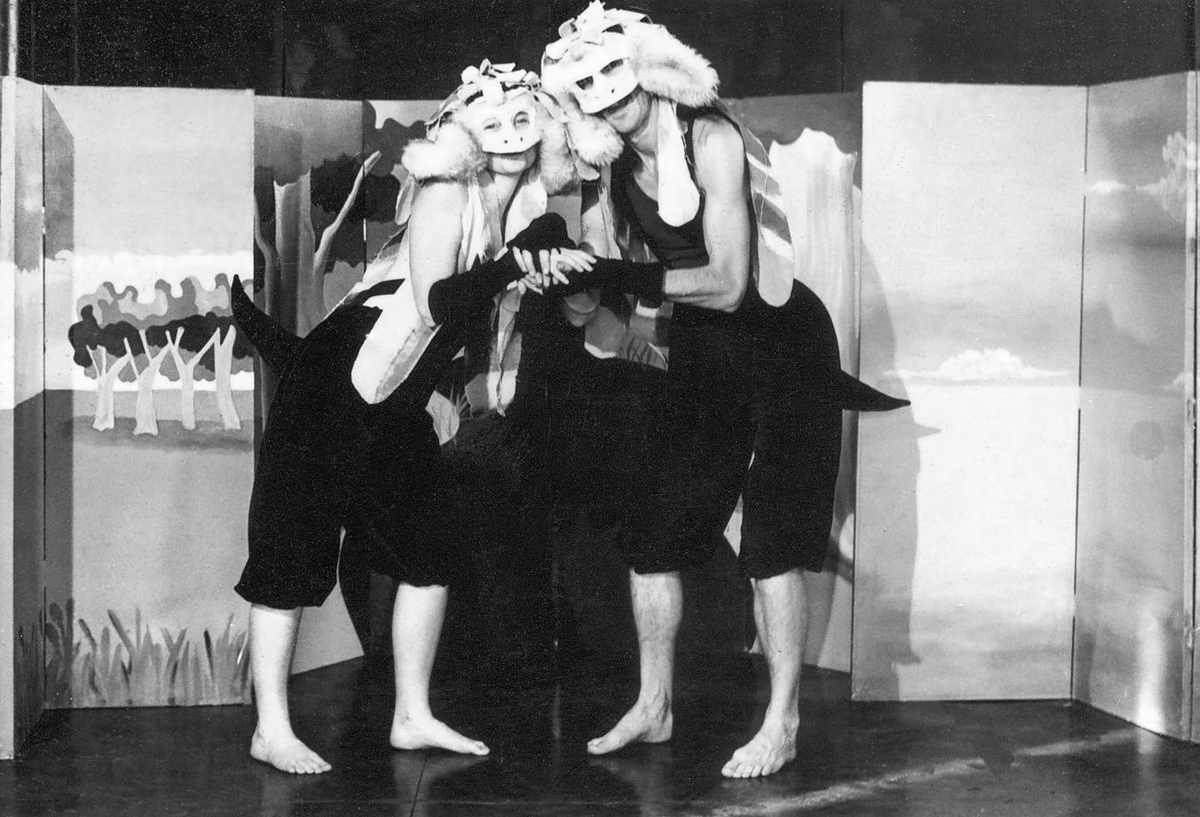 Ken Evans design for the staging, puppets and costumes reflected Ron Brooks’ illustrations for the book but didn't attempt to be a replica of their detailed, ever-changing style. In Handspan’s play, three brightly painted screens, depicting a waterhole in a stylised Australian landscape, could be set up anywhere. Puppet manipulators were visible, actors wore masks and simple costumes and performed in front of and around the screens and amongst the audience.

One of Handspan’s most popular shows, THE BUNYIP OF BERKELEY'S CREEK was performed over 500 times,touring for three years across Australia and the world adapting to performance locations and touring circumstances of all kinds.

Bunyips on the road

The production was originally created for three performers in 1980. Almost immediately, a two-hander version of the play was devised and a second version built to make it possible for the work to be carried in a backpack to the USA, Europe and UK by Ken Evans and Helen Rickards, travelling to the XIII UNIMA 2 Congress & 1980 World Festival in Washington DC - Handspan's first international appearance. Concurrently the play toured in Australia, through the outback for the Northern Territory Arts Council performed by Peter J.Wilson and Andrew Hansen.


The two-hander version of the show came to an abrupt end when the puppets and props backpack was stolen from the Handspan studio soon after its return from overseas. There it had survived abandonment on British bus lines, motor bike transport through the wet English Lake District and curiosity at an Amsterdam police station. The snatch from Handspan’s home was quite shocking: the only time in Handspan’s long open-door studio incumbency that anything was ever stolen:


Stories of life on the road with Handspan’s BUNYIP… are legion - the pictures in the BUNYIP Gallery tell some of the story.
.
THE BUNYIP … was performed in school and community venues and sometimes in theatres. It replaced Hansel and Gretel - Out of the Booth as a stimulus performance for community arts engagement. Both in schools, and for family and community audiences the play was often followed by Handspan artist workshops or local residencies in puppet making and performance.

In theatrical settings, the play was the feature work of Handspan’s only self-promoted touring ventures. The work shared the Superfun Show bill with magician, Doug Tremlett, in at Camberwell Library Theatre (1980), and toured summer holiday locations on Mornington Peninsula in Victoria: Bunyip on the Peninsula (1981) and with Kooka Puppet Company, Seaside Double Header (1982). 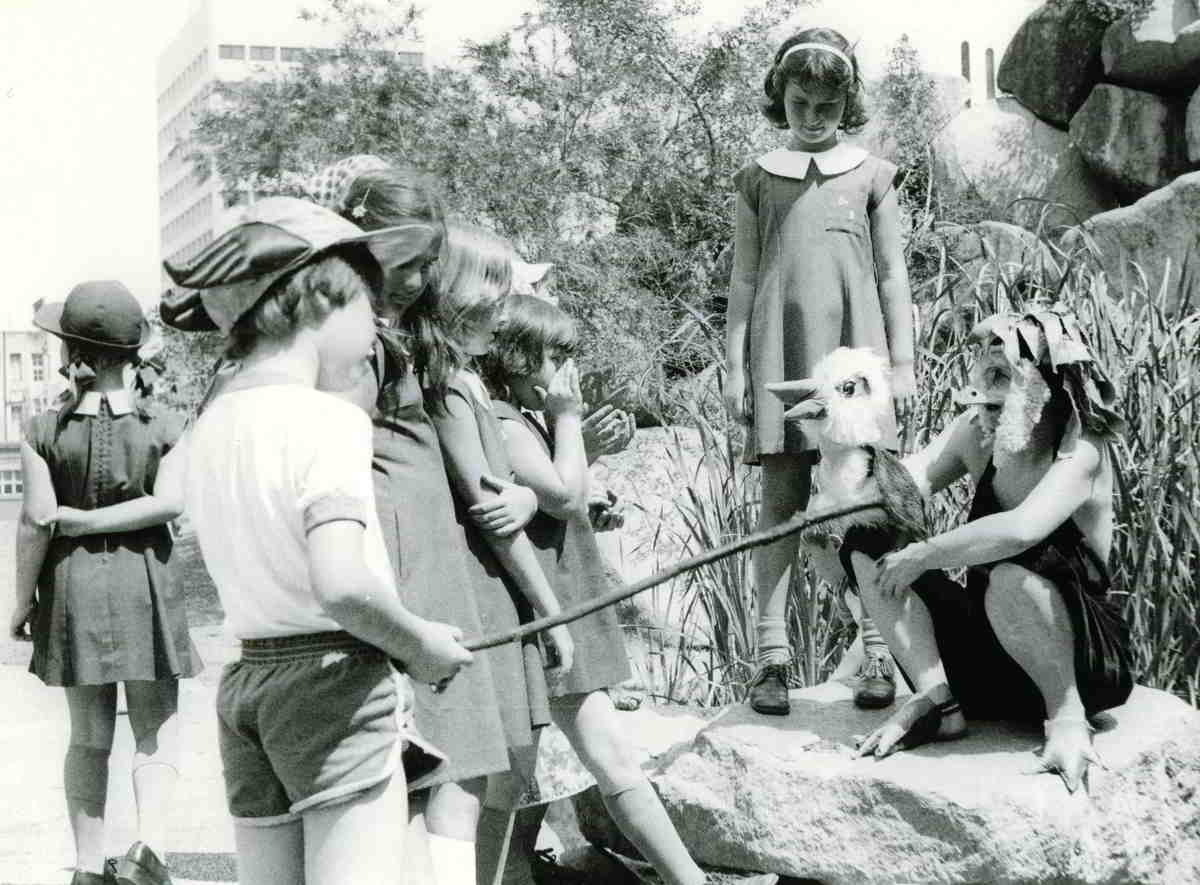 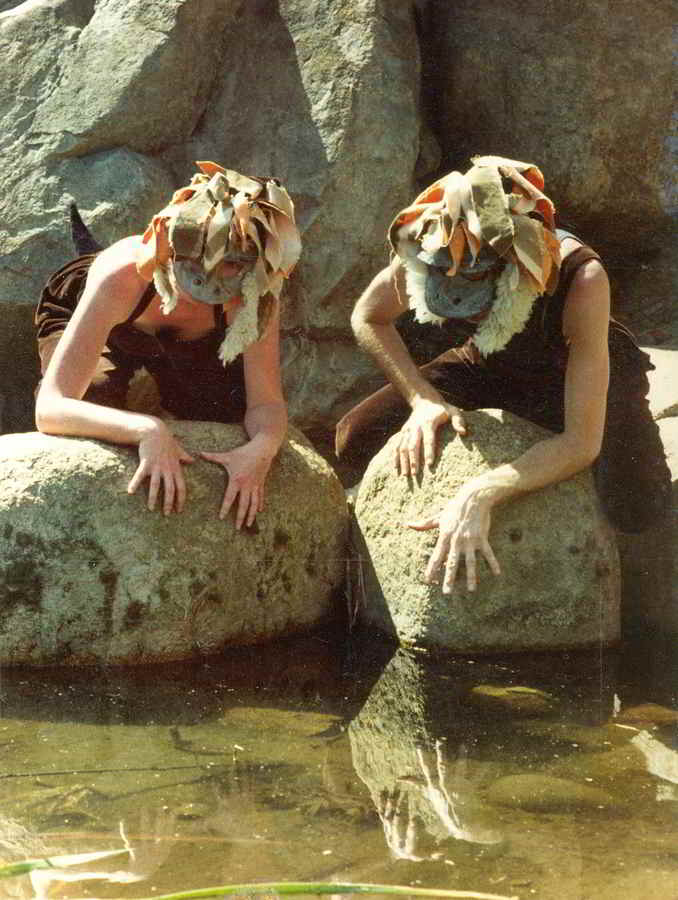