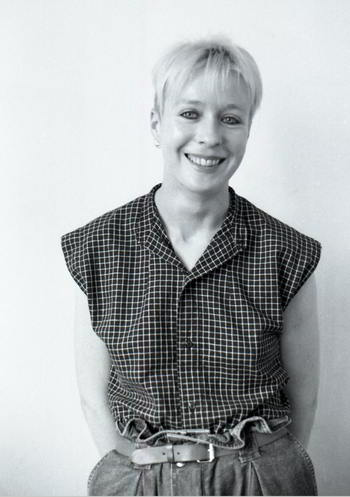 In 1977, Jude (then Jude Bentley) was a psychiatric nurse and Peter J.Wilson's partner, thereby co-opted into the Handspan enterprise from the beginning.

On the day of Hansel and Gretel's opening performance she donned an 'opening frock' and chivvied the bleary-eyed and exhausted company, found asleep in the workshop after a night of finishing touches, not only onto the stage, but into the sense of occasion!

Jude set a benchmark for Handspan public relations that was unique. Her style and sensibility underpinned countless public and private Handspan moments and occasions, and she became a respected and successful publicist for the company as its productions attracted attention in Melbourne and overseas.

Jude married Jean-Paul Bourguignon and disappeared to Paris in 1979. There, she hosted visiting Handspan artists as they made forays abroad to discover new puppetry practice and establish touring contacts in Europe. On her return to Australia in 1984, Jude became part-time administrative assistant working with Helen Rickards, Executive Director. Together in 1986, they (and Philip Lethlean) as Production Manager, revelled in producing Jack Davis' play, No Sugar for Performing Lines season in Melbourne at the Fitzroy Town Hall. It was an independent gig for them all but its experience, managed out of Handspan's studio, was as formative for Handspan as it was for themselves.

Wendy Blacklock, Director of Performing Lines, for whom they worked, mentored and honed their skills and talents for production and promotion in a project that was ground-breaking for all concerned. Individually their future independent careers took form. For Handspan, media interest in No Sugar introduced Jude to the press just as the company's productions were ready for mainstream scrutiny. Smalls first sell-out season at Anthill Theatre, South Melbourne coincided with the No Sugar project. It benefited instantly, and established Jude firmly as publicist extraordinaire.

It was also Jude's meticulous and thorough archiving of the company's early archival material and statistics that provided the source for much of the information available on this site.

With a small child, Oliver, to support, Jude left Handspan to set up her own company in 1987. This saw her working with a variety of local theatre companies as well as at Penguin Books Australia where she was soon offered full time employment. She remained in the publishing industry for the next 10 years. After forging yet another career in Public Relations, where she worked in senior positions for many years, Jude moved to the Macedon Ranges to grow olives and ride horses in 2005.

Reflecting on her time at Handspan1 Jude said:

It changed my life and completely changed my professional life. Working in such a creative environment where everyone dared to try, enabled me to discover a part of myself I never knew I had. I can never thank them enough for the opportunities that came my way because of my time with them.