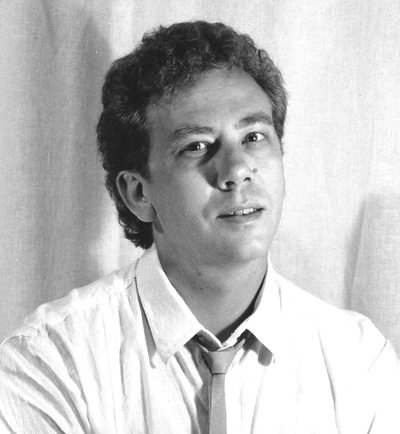 Andrew Bleby discovered Handspan at the We’re On Festival in Melbourne in 1980 and got to know them better sitting in the back of their Kombi in Adelaide. As Program Co-ordinator, he had brought them to tour The Bunyip of Berkeley's Creek to schools in metropolitan Adelaide for the Come Out Festival. In 1983 he presented the premiere season of Secrets at the Adelaide Festival Centre for the Australian International Puppet Festival.

By this time he had fallen in love with Helen Rickards one of the founding members and soon followed her to Melbourne where they married in 1985.

Andrew visited the company on tour, presented the company’s work several times at both the Next Wave Festival Melbourne (1985), and at the Adelaide Festival Centre in the 1990s. He never actively worked on a Handspan show (unless you include parading down a Wangaratta street with flags flying from his back) but was an active member of the company and the Board, serving as its Board's first Deputy Chair.

He was also an occasional videographer/editor of Handspan work, sitting on the living room floor dubbing from Video 8 camera to a VHS cassette, collating clips of company protest performances and its 10 Year Exhibition. More recently he has done similar video compilation with digital technology to provide animated samples of Handspan records for this site.