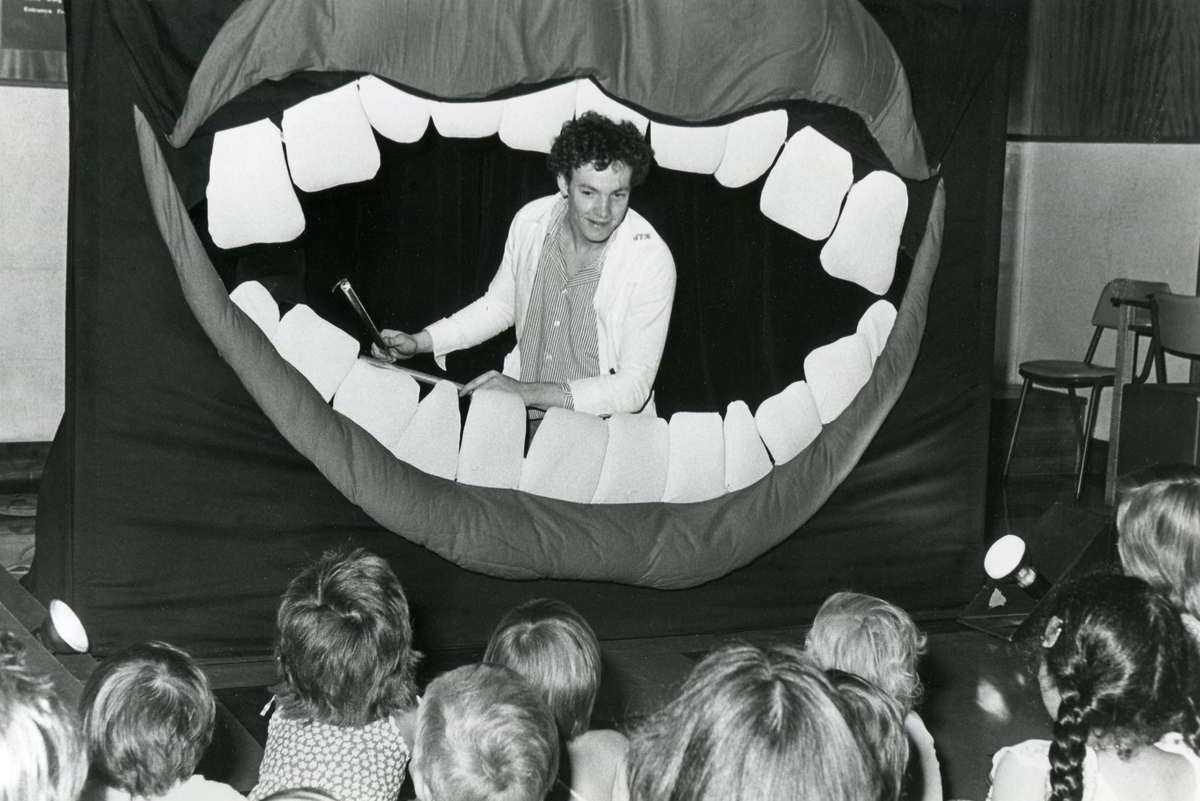 The Mouth Show Tony Rickards, the visiting Dentist, St Vincent's Hospital, Melbourne, 1980
Photographer: Unknown,1980
Though my teeth are rotten ... My smile is soft and sweet ... And who needs teeth ... When all you eat is sticky soft and sweet!
Sugar's opening vamp, Christine Woodcock,1978


THE MOUTH SHOW was a comedy for primary school audiences of all ages created by Handspan to promote preventative dental health care.

For the Handspan founders, here at last was an opportunity that could satisfy the collective ambition to bend some puppetry conventions and create a contemporary theatrical work for young audiences, that was both entertaining and informative!

The play was commissioned by the DePaul Society Community Health Centre in Fitzroy introduced to Handspan by Christine Woodcock. The original intent for the work was as a featured program for Fitzroy Teeth Week. There, it proved such a success that bookings for further performances flowed in from across metropolitan Melbourne, and it was the extensive touring of this work for more than two years that secured Handspan's ongoing operation.

The Mouth, the stage

THE MOUTH SHOW didn’t break away entirely from the concept of the travelling booth stage that hides the manipulators of its characters.

The setting for its cartoonesque script was an enormous Mouth which opened as the play began, to reveal an actor – the dentist – cleaning its teeth. Stepping out of the mouth, the dentist left, and seizing her chance, Sugar, the ugly tongue-temptress, inveigled her way in. Following her lead, Plaque and Germs crept between the teeth to hold a 'mouth warming', 'rot and roll party'. Fortunately, the play’s young audiences came to the rescue. They saved the Teeth by sending in a giant carrot, in which resided Crunch, the Natural Goodness Superhero, and a big toothbrush housing Bristle, the Fluoride Cowboy. This comic duo stood for 'tooth and justice', and fought off the invaders in a true comic suspense joust.

Dear dentist, it is a very nise show. I enjoyed it. Please come again

Sugar is fat and sweet and I do not like her verey much.


The Handspan touring booth was designed by Ken Evans for this production, a triangular framework built of interlocking steel bars which held blackout curtains tautly in place around its exterior. The Mouth opened on one side of this triangle to reveal a black-velvet lined interior in which, similarly black-velvet clad, puppeteers invisibly operated. Carefully angled footlights created a black theatre light curtain in which the action magically took place.


This basic booth remained in use for years in Handspan touring productions for young audiences. It was adapted for outdoors The Apple Show (1979), became a giant television Prime Time (1980) and a revolving streetscape Streetwise (1983), combining the invisible magic of hidden puppeteers with the versatility of actor/performers in flexible performance locations. 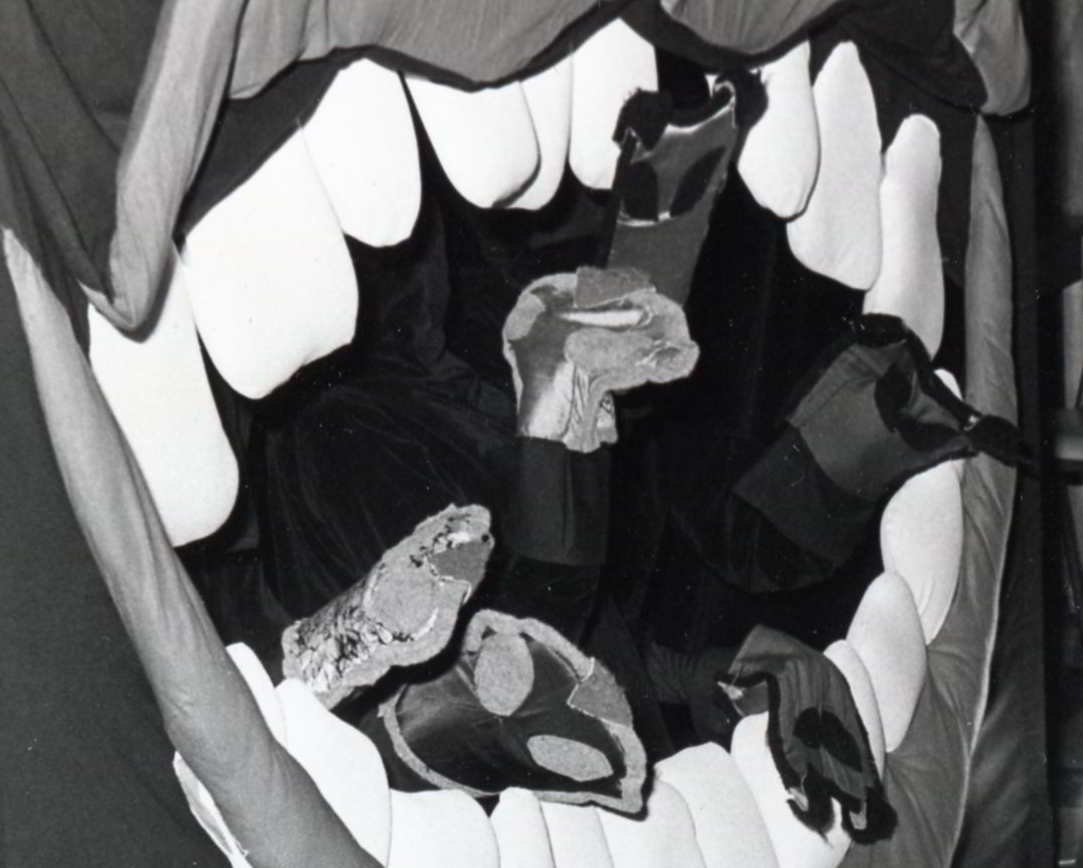 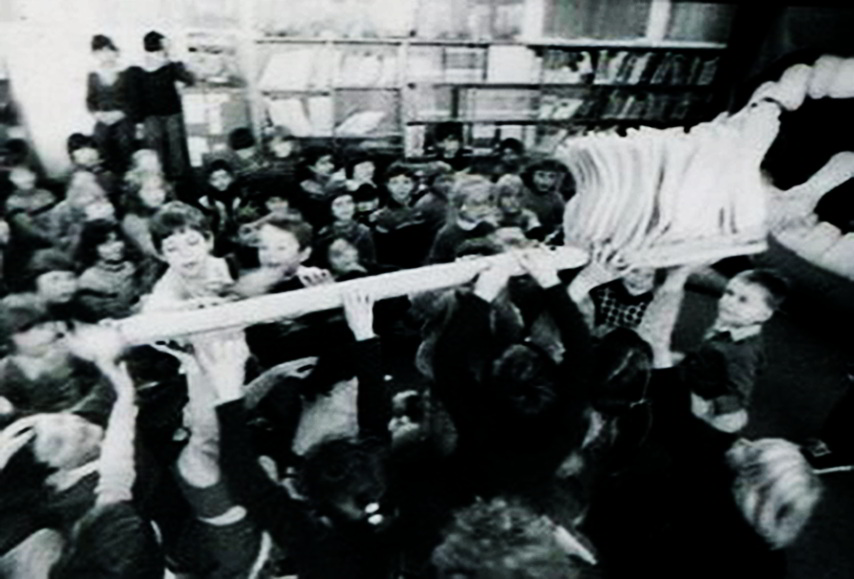 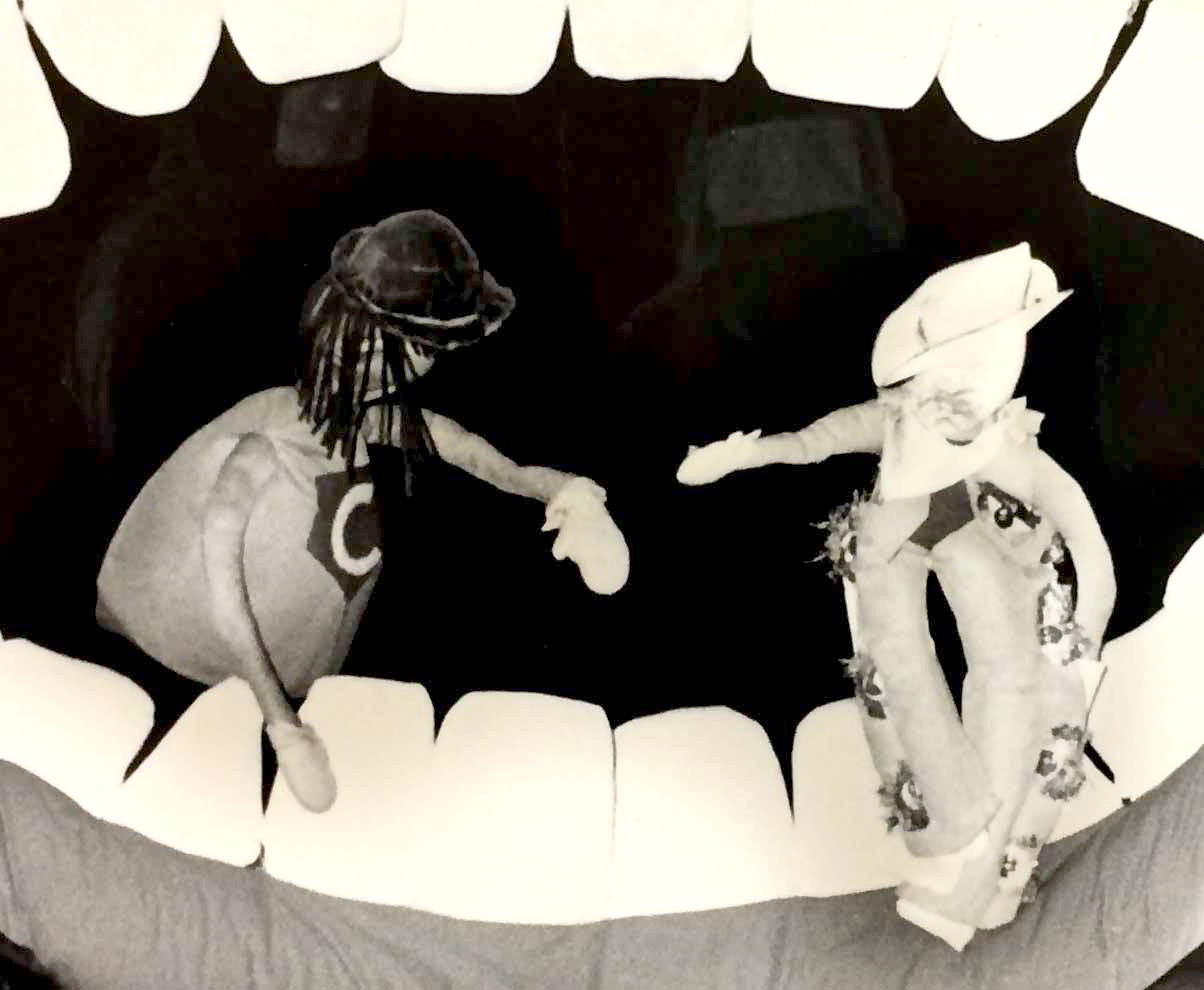 The Mouth itself became the topic of minor attribution squabbles in 1979 when the Tasmanian Puppet Theatre's Momma’s Little Horror Show1 premiered at the 1979 Tasmanian Puppet Festival – also including a large opening mouth and a vamping ‘momma’. Enquiries appeared to confirm that it was a case of 'animus mundi' as no one could ever uncover an opportunity for cross-fertilisation between the creators of the respective works. However, it made for some conversation in the small pool of the Australian puppetry community particularly once Momma… reached the mainland for its Last Laugh season in Melbourne in 1981.

Handspan was nevertheless influenced by the puppetry practices of the the Tasmanian Puppet Theatre (TPT), founded and directed by Lyndon Peter Wilson. His primary school play, North Wind and the Sun (1976) moved puppets in and out of the booth and actively engaged audiences in its storyline, and impressed Handspan artists with its successful experimentation with the artform. This inspiration was evident in Handspan’s theatrical approach to Hansel and Gretel – Out of the Booth, and realised again in THE MOUTH SHOW.

THE MOUTH SHOW played up to five performances a day and toured both with Dental Health Education programs and independently through Handspan for three years. It was eventually recast with performers outside the company collective initiating the company's first auditions!. This kept the work in repertoire until 1980 and supported Handspan while new work was created by the core company artists.

Dear Handspanners, Just a note to let you know that “The Mouth Show” was a roaring success at Warragul, and to thank you very much for coming. The kids (and teachers) still haven’t stopped talking about the characters and we were most impressed with the dental health aspect.


Several artists who came to Handspan through the MOUTH SHOW became members of the company and influenced its direction and work through its future years. From the first auditions, recent Rusden College 2 graduates were drawn to Handspan and many were cast in ensuing Mouth teams, and became key artists in Handspan’s later Theatre-In-Education plays. Budding comedians were cast, and emerging actors, but rarely puppeteers – a scarce commodity in Melbourne in the late 1970s. As Handspan core artists themselves learnt, developed and experimented in the discipline, they also trained performers and instigated new collaborative ventures in consequence.

After twice being recast, the MOUTH SHOW was physically worn out, despite ongoing repairs and refurbishments, and it was retired from Handspan’s touring list. It was the show that confirmed newly-formed Handspan’s interesting artistic status; positively extended its reputation and profile enabling new opportunities; and created an ongoing financial viability from which the company could extend. 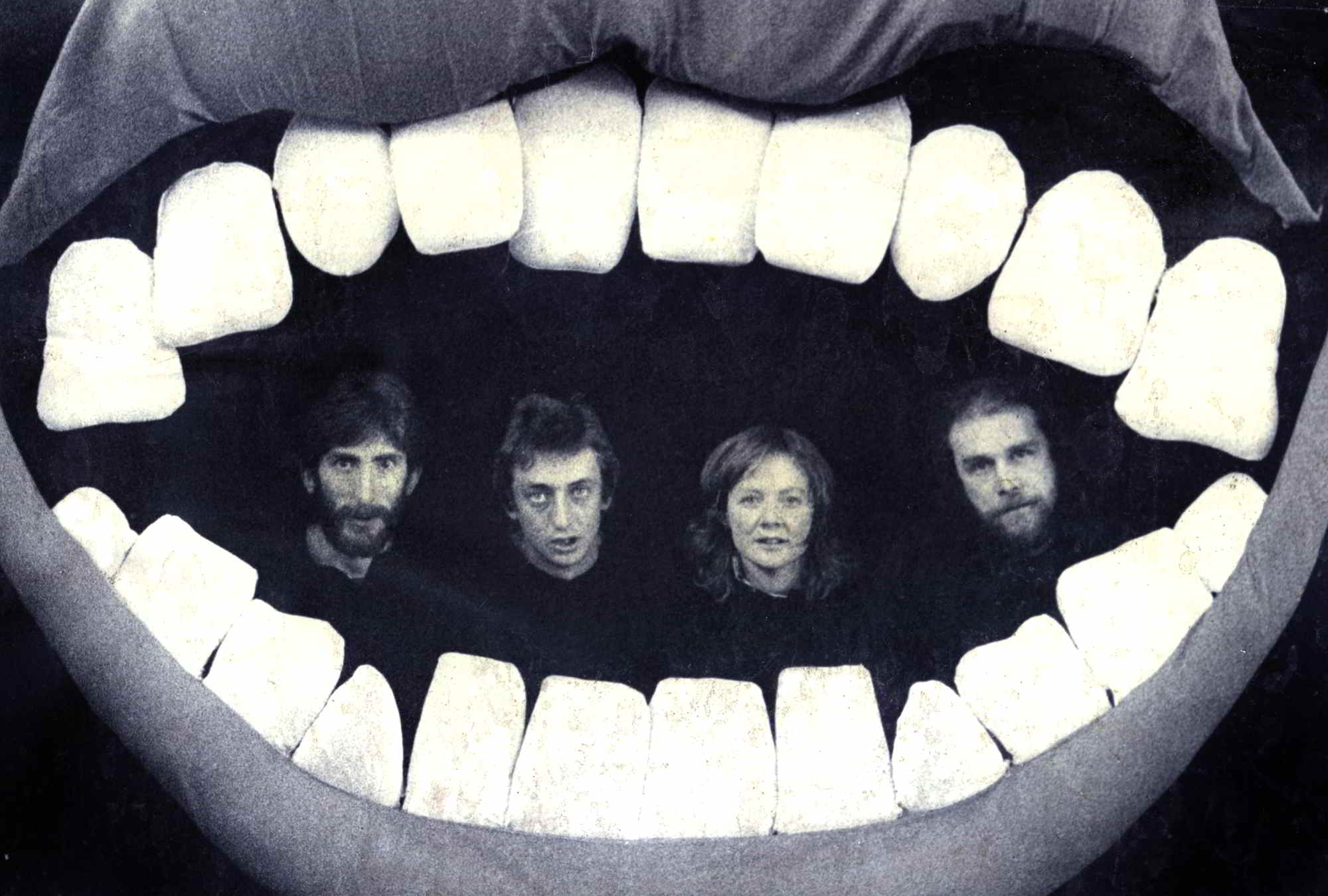 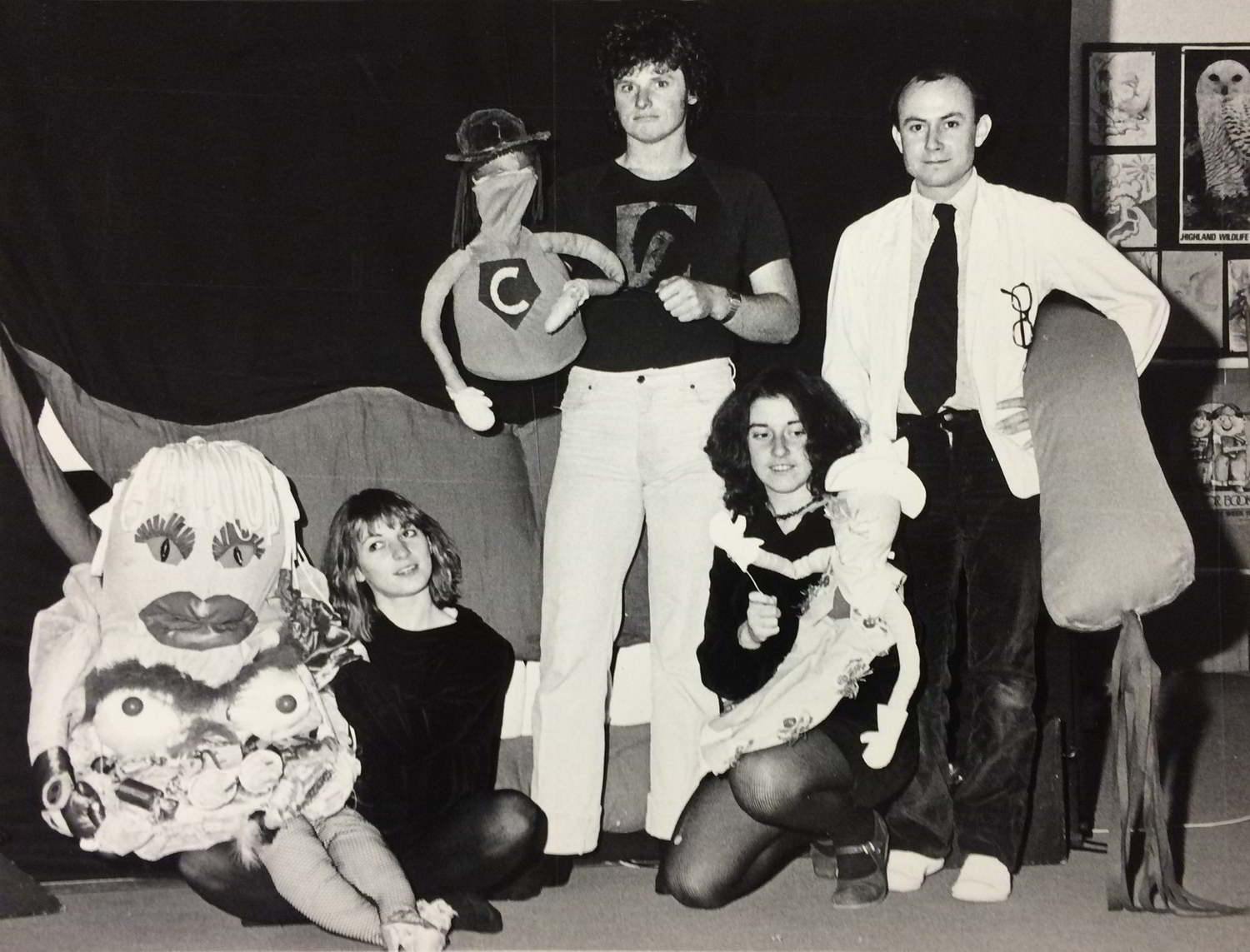