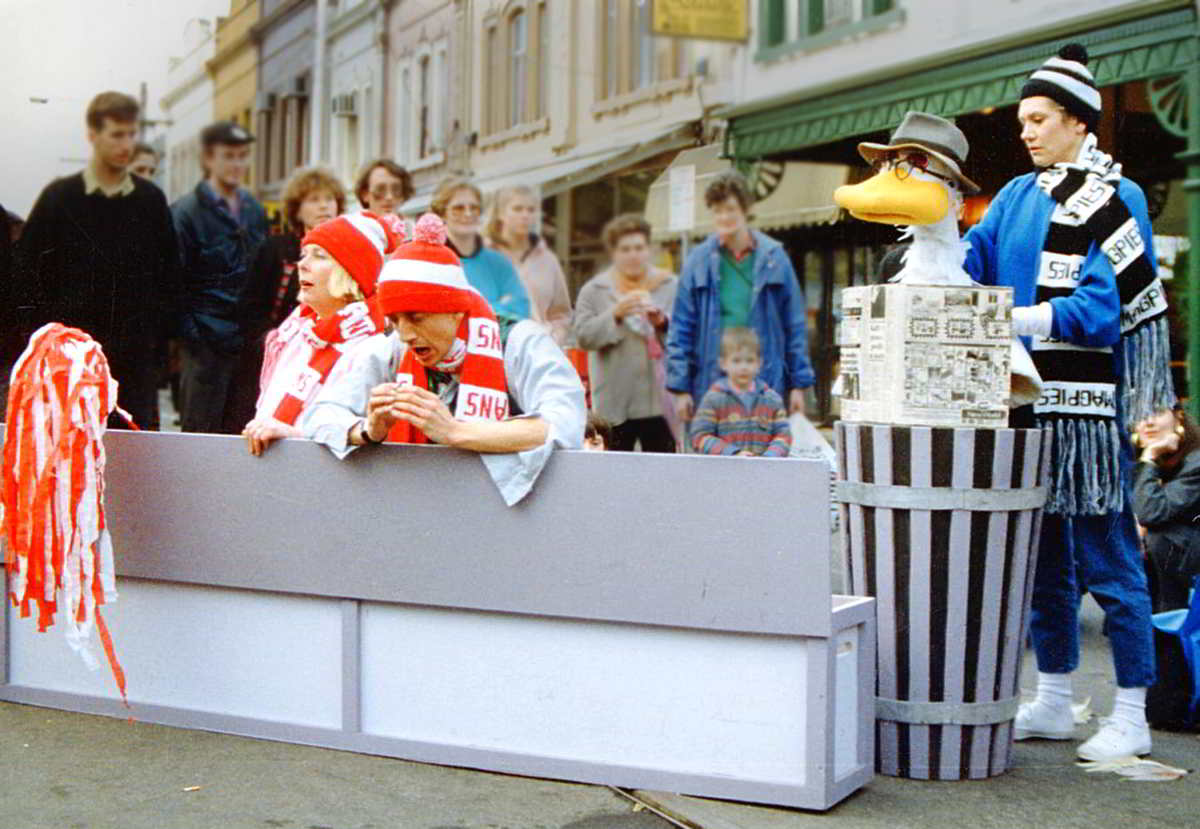 Out for a Duck Daphne Duck at the footy in Brunswick St. Fitzroy Annie Wylie, John Rogers and Avril McQueen with Daphne.
Photographer © Ken Evans, 1987
...illustrates, in a gentle but nicely image-based way, that - in the end - there's nothing wrong with being different.
Geoffrey Milne, Centrestage, Australia, August, 1987


OUT FOR A DUCK was the first production created by the company under the artistic direction of Trina Parker, and the first of five theatre-in-education plays1 written for Handspan by Gilly Farrelly. New Handspan members worked with the company for the first time in this production too, signalling Handspan's transition to a new decade of artistic collaboration that created a new repertoire with new artists and projects for the company's now well-established markets.

The play was also directed by Gilly who explained her experience - common to the medium - to Richard Sallis in a Lowdown article:

OUT FOR A DUCK began because longtime Handspan member, Avril McQueen could speak duck! This finely-honed party-trick sparked the comic script which was devised to show upper primary school age audiences that it's OK, if sometimes awkward, to be different. Owing homage to Anderson's Ugly Duckling story, the play centres around Daphne A. Duck, originally played by Avril, who arrested for 'being a duck in a public place'2 recounts the trials she has encountered in trying to fit in to the world around her.

The plays follows Daphne's experiences in school where her history and culture make everyone laugh at her quiz answers; at the footie and the ballet where her clothes and behaviour turn out to be inappropriate; and on TV in 'Perfect Hatch' where she is seen as a 'dag' by all the super-cools because she answers honestly. Chased down by Inspector D. Rake, Daphne has her day in court where everyone turns into ducks, 'too busy quacking to deliver a verdict. There is no crime'3 . 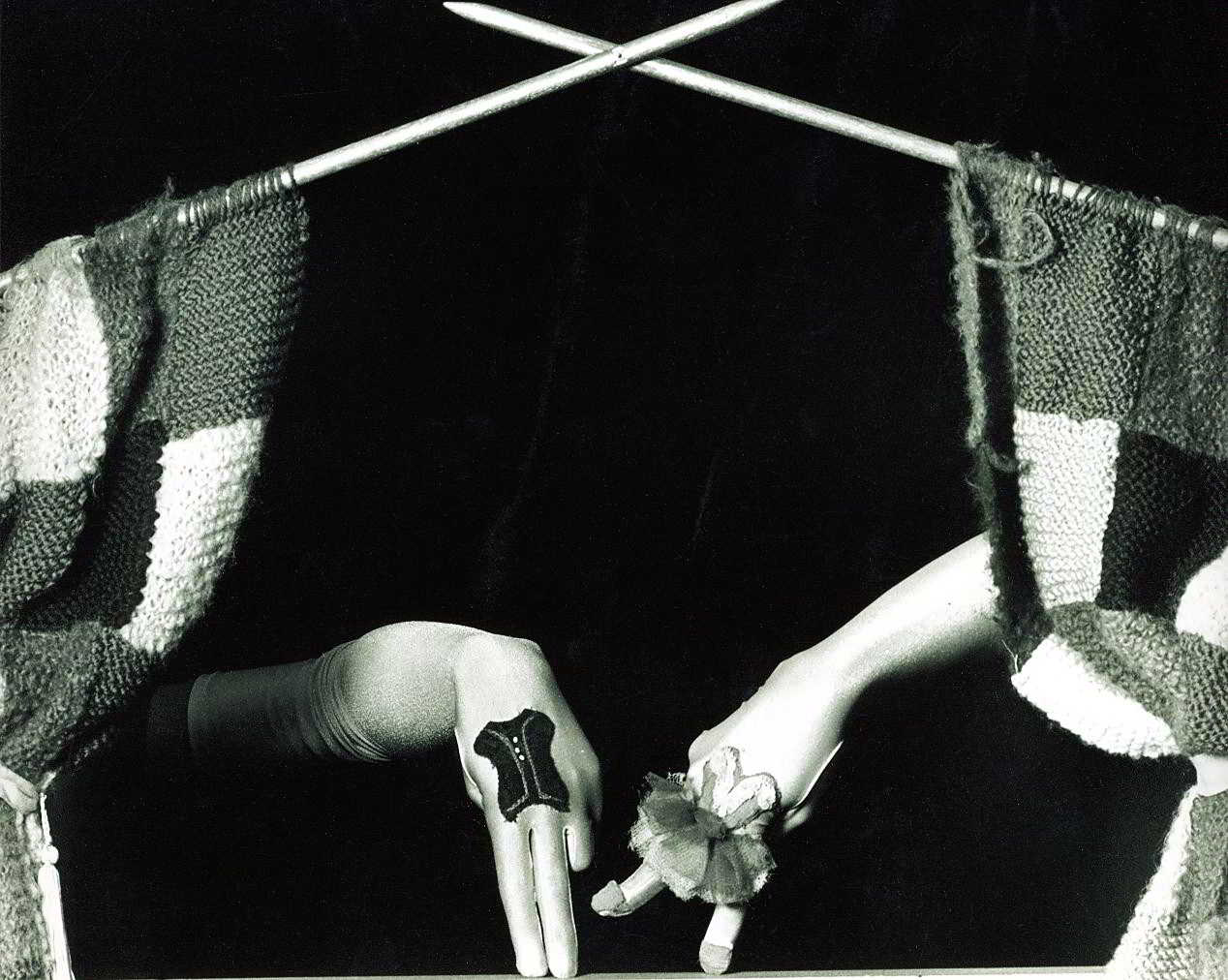 At the Ballet
Photographs: © David Herd, 1987
Click photos to enlarge 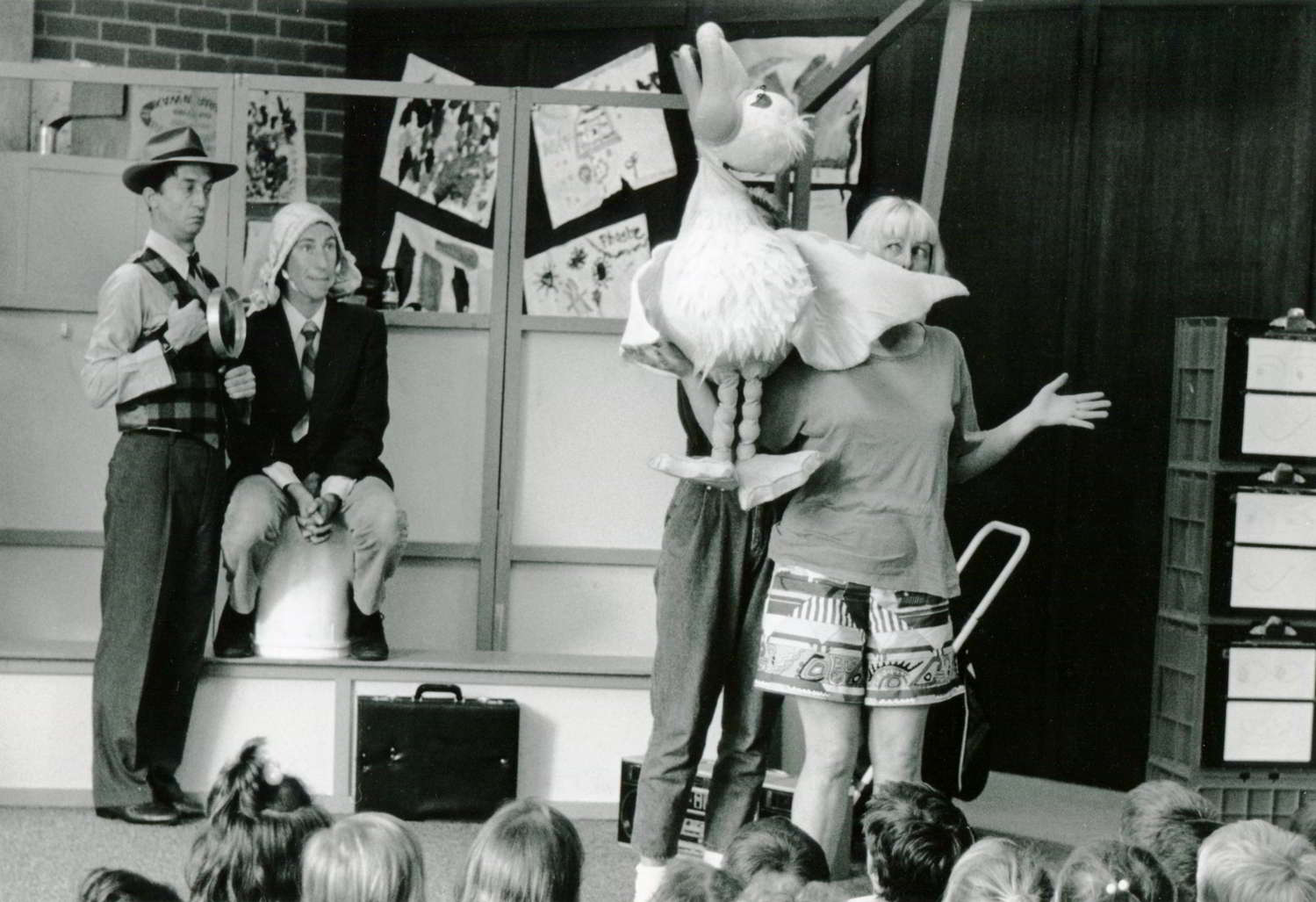 OUT FOR A DUCK was staged in a tram stop set in and around which actors and puppets performed the action. Its simple structure transformed into schoolroom, stadium, theatre and TV studio and provided hiding places for Daphne as she was chased from sideshow alley's duck shooting range to a restaurant serving 'duck l'orange'. 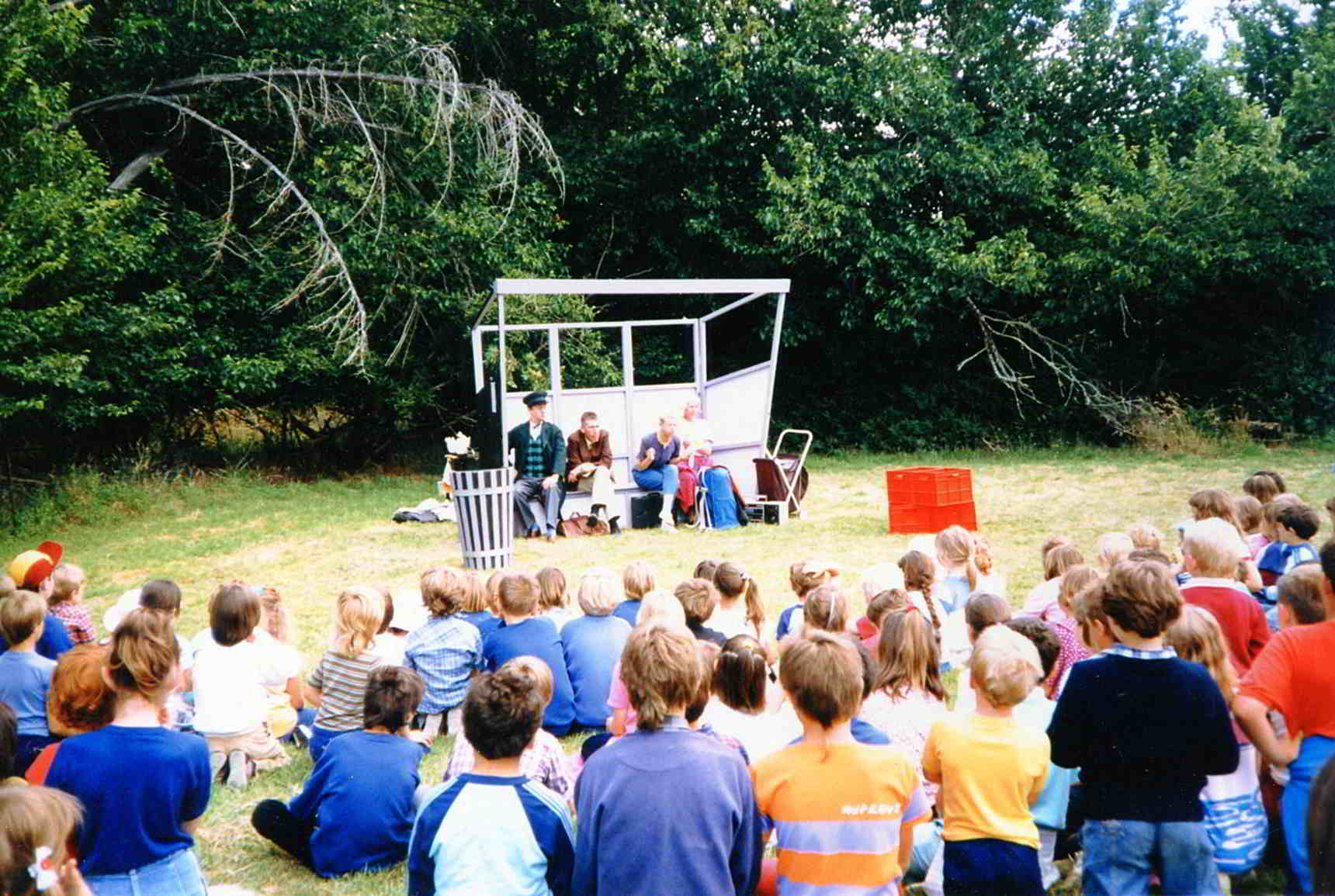 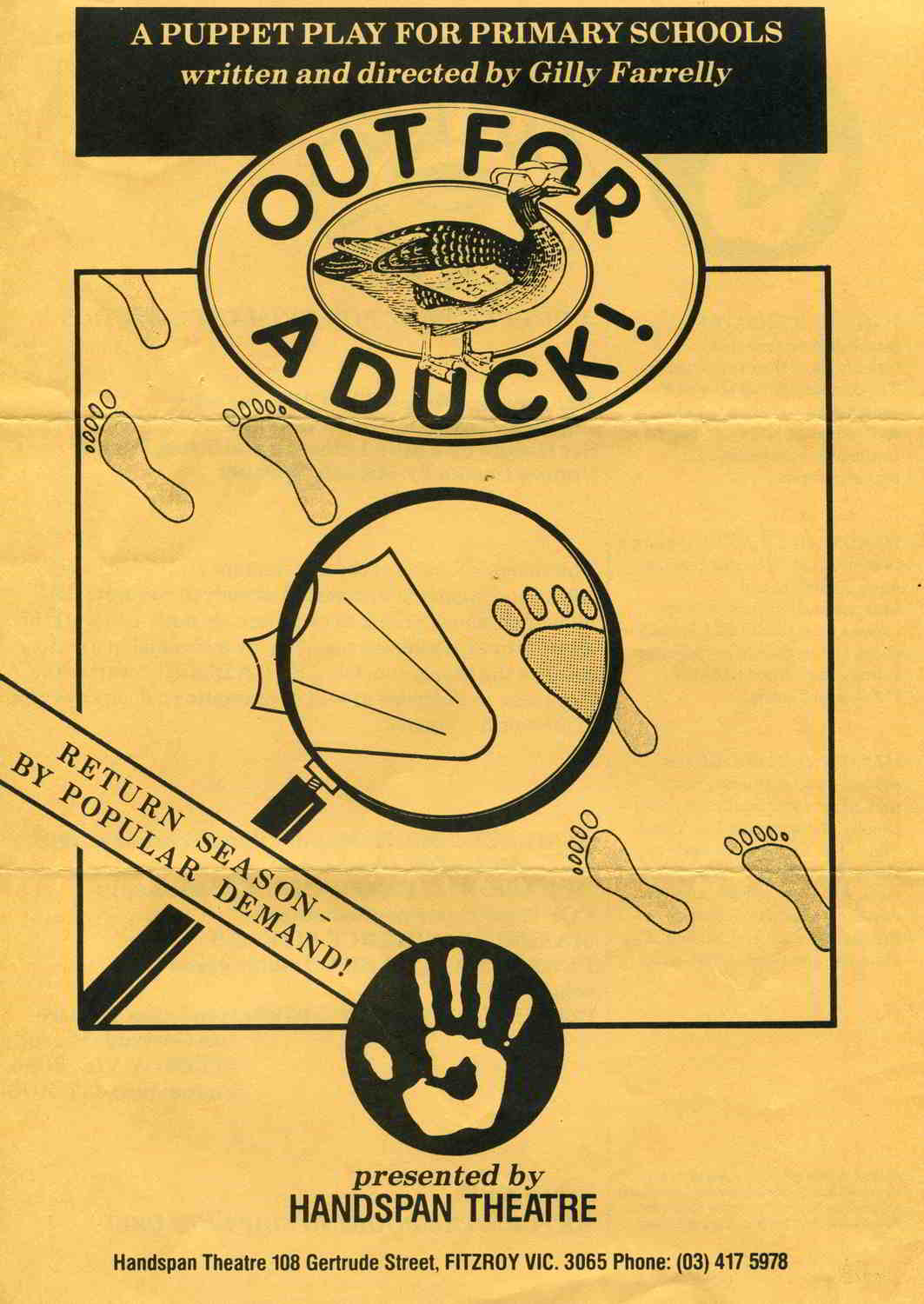