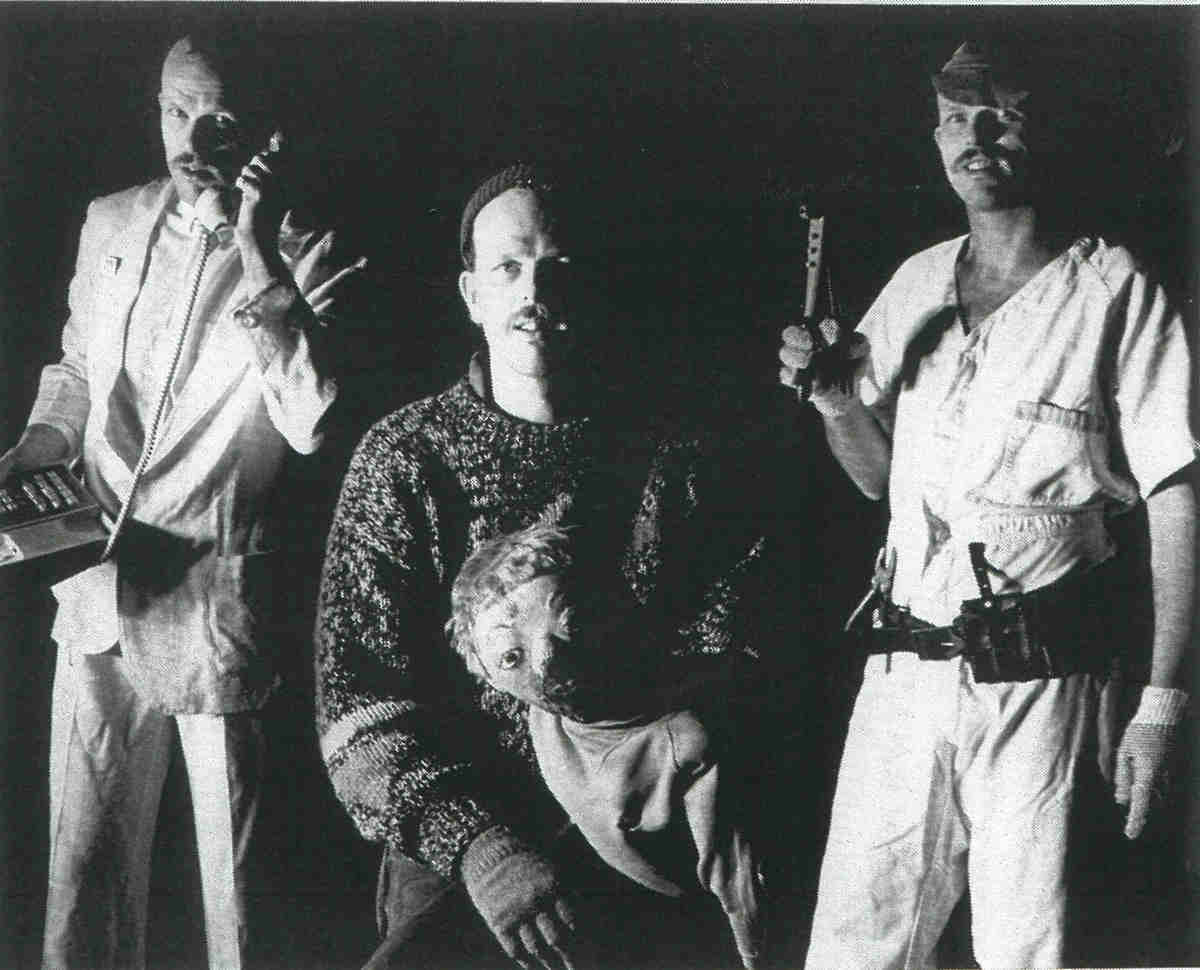 
THE TOMORROWLAND GAME was a multi-faceted theatrical and workshop performance project created by Andrew Hansen for a Puppetry-in-Education residency initiated by the the Royal Melbourne Zoo Education Service (ZES).

The project,'s theme, Endangered Species and Habitat Loss, aimed to stimulate discussion about environmental conservation and involved groups from 20 schools1 during a six-week program at the Zoo.

Andrew was at the time the Artistic Co-ordinator of Handspan's newly defined Handmade program and had previously led the company's artist-in-community project Snapshot in Wangaratta. The Zoo project was an opportunity to build on and develop the framework into a participatory theatrical experience as well as an active workshop program within a collaborative partnership with clear educational aims.

450 students and more than 50 Zoo staff and artsworkers participated in THE TOMORROWLAND GAME: in promenade-theatre performances, puppetry-making workshops and the creation and performance of 20 scripts about environmental interrelationships using 400 puppets and objects.

THE TOMORROWLAND GAME was the third community artist-in-residency undertaken by Melbourne Zoo Education Service. In 1985, the Zoo's artist was puppeteer, Roy McNeill. His successful project Let's Not Say Goodbye inspired the Zoo to again approach a puppetry artist to lead their next education-focussed program.

After initial discussion with Handspan Theatre in late 1986, their brief outlined that:

Using the medium of puppet theatre, the Zoo Education Service seeks to explore the problem of habitat destruction and the consquent effect on wildlife. Since puppetry allows for participatory and creative discovery of the issues involved, the program will enable students to recognise the ways in which some aspects of our lives impact on the environment.


THE TOMORROWLAND GAME was devised and written by Andrew Hansen with Helen Rickards both to fulfill the thematic and educative brief, and as a deliberate attempt to create a new performance form, in a play that incorporated multiple locations, extended over several sessions, and required the active engagement of all participants/audiences. The resulting work was led by one performer, Andrew Hansen in three allegorical roles that represented the complexity of human attitudes to world habitats:

The Rivet Popper, an employee of an exploitative organisation who is deliberately destructive to the Earth's resources for mere economic survival; The Cosmic Gambler, a corporate high flyer, seeking short term capital gain with a total disregard for the future; and The Fix-It Guy, a person faced with ecological destruction of the Earth who seeks sound lifestyle alternatives for human needs and individual actions.


Philip Lethlean was Technical Assistant to the project and Handspan members assisted in its production and workshop sessions. Frank Ryan and his Zoo Education staff, in the role of Airline Stewards, led students from scene to scene and explained 'flight instructions' en route. ZES supplied research information, materials, resources and locations for the performance throughout the Zoo landscape. These included its hitherto little-used tree trunk tunnel which led participants into their interactive journey; the main zoo thoroughfares for a public puppet parade and behind-the-scenes workshop and garden area for performance settings and construction workshop settings.

The program involved participating schools in 3 visits to the Zoo at fortnightly intervals where they Played THE TOMORROWLAND GAME in 2 hour sessions:

Each visiting student group was lead through the Zoo grounds by an Airline Steward, where they met the Rivet Popper blithely tinkering with the working parts of a Flutterby Airlines plane, carefree about removing component parts holding it together. Despite this, he convinces the Steward that it will nevertheless be quite safe to board this plane to for a trip around the world. 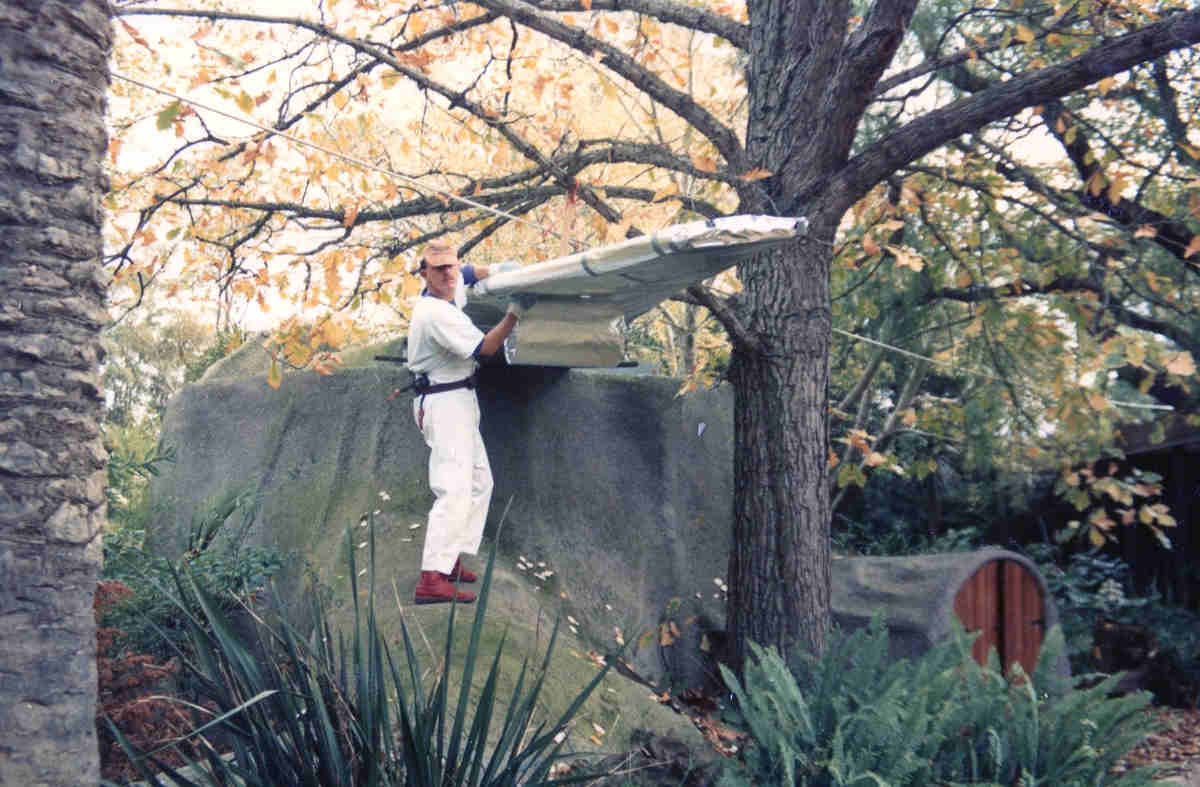 The Rivet Popper at work on the plane.

Passengers board the plane via the tree trunk tunnel and after the Game's safety check and emergency rules are read by the Steward, a simulated flight begins. Through eight 'plane windows' illuminated environmental dioramas appear: Air, Water, Wetlands, Oceans, Energy Resources, Forests, Wilderness, Antarctica and Land Quality. Lights flicker, the soundtrack becomes ominous and each scene is destroyed by human agency. In a blackout, an emergency is declared by the Steward. Bags over their heads, the passengers shuffle off the plane hand in hand through a maze listening to the voice of David Attenborough repeating the World Wildlife Foundation's goals for sustainable development of the Earth. 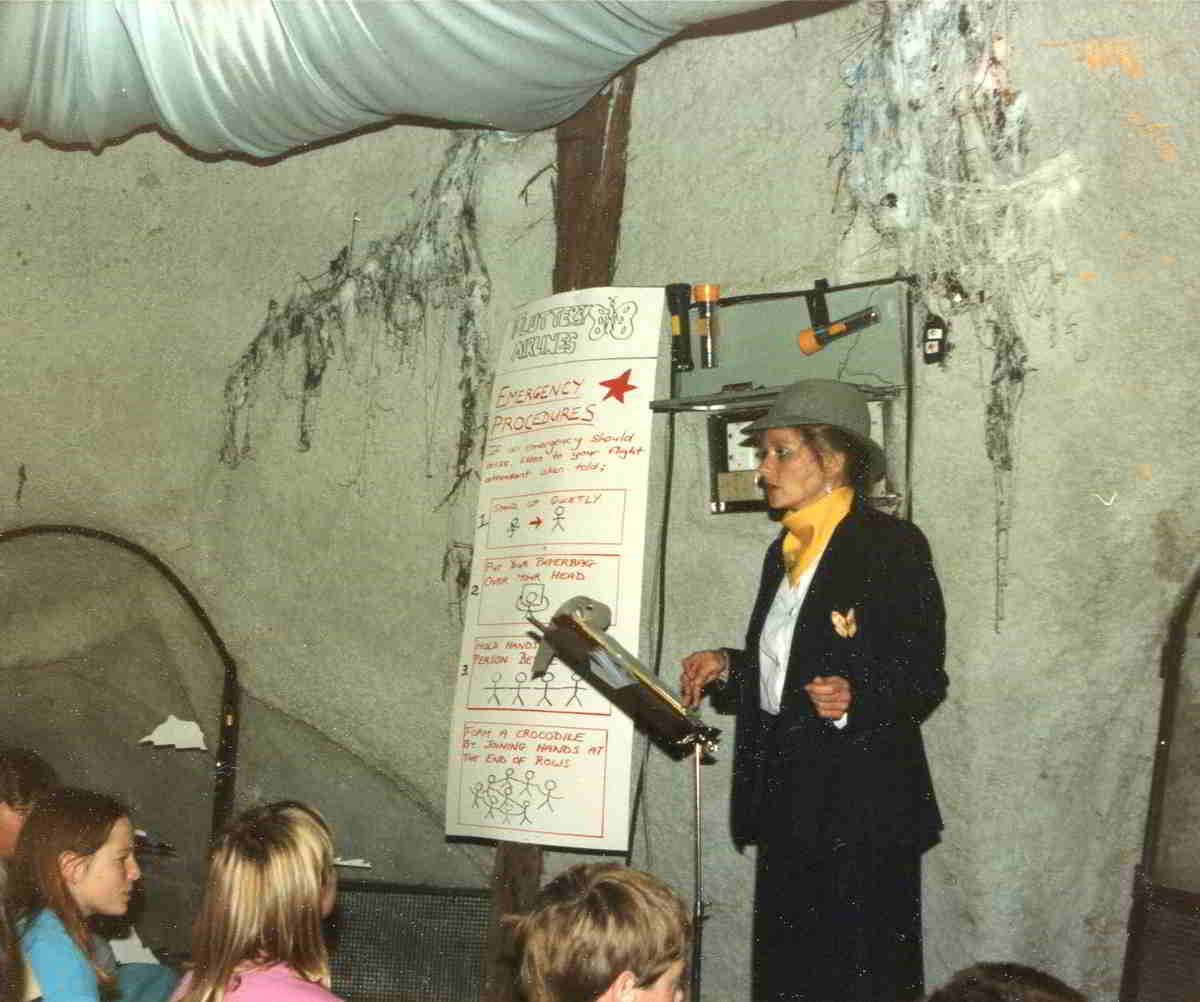 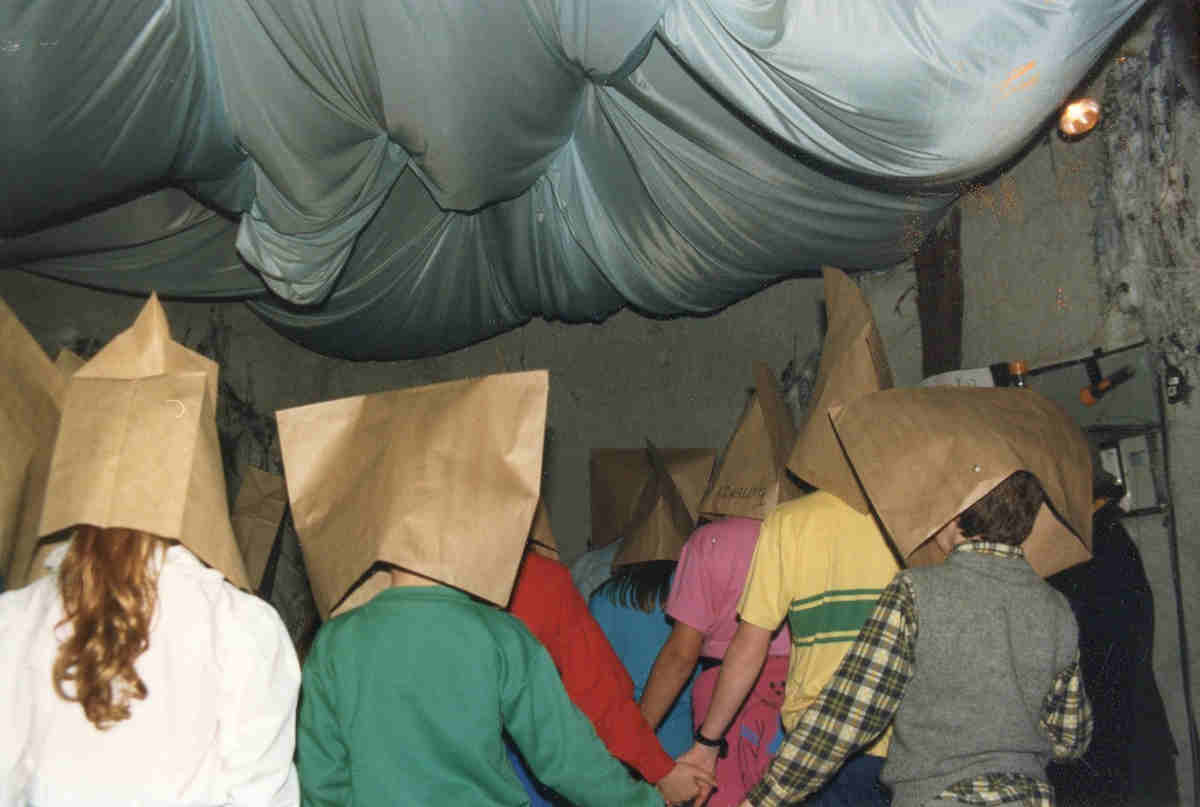 Hand-in-hand the Passengers shuffled to disembark.

Emerging into an alien and empty white environment, the passengers discover they have arrived in Tomorrowland. They find a box empty except for a small mirror tile which reflects their own faces. The Cosmic Gambler appears and explains that this is the Future Game: the box contains nothing but the image of the person who is capable of solving the Earth's environmental problems. 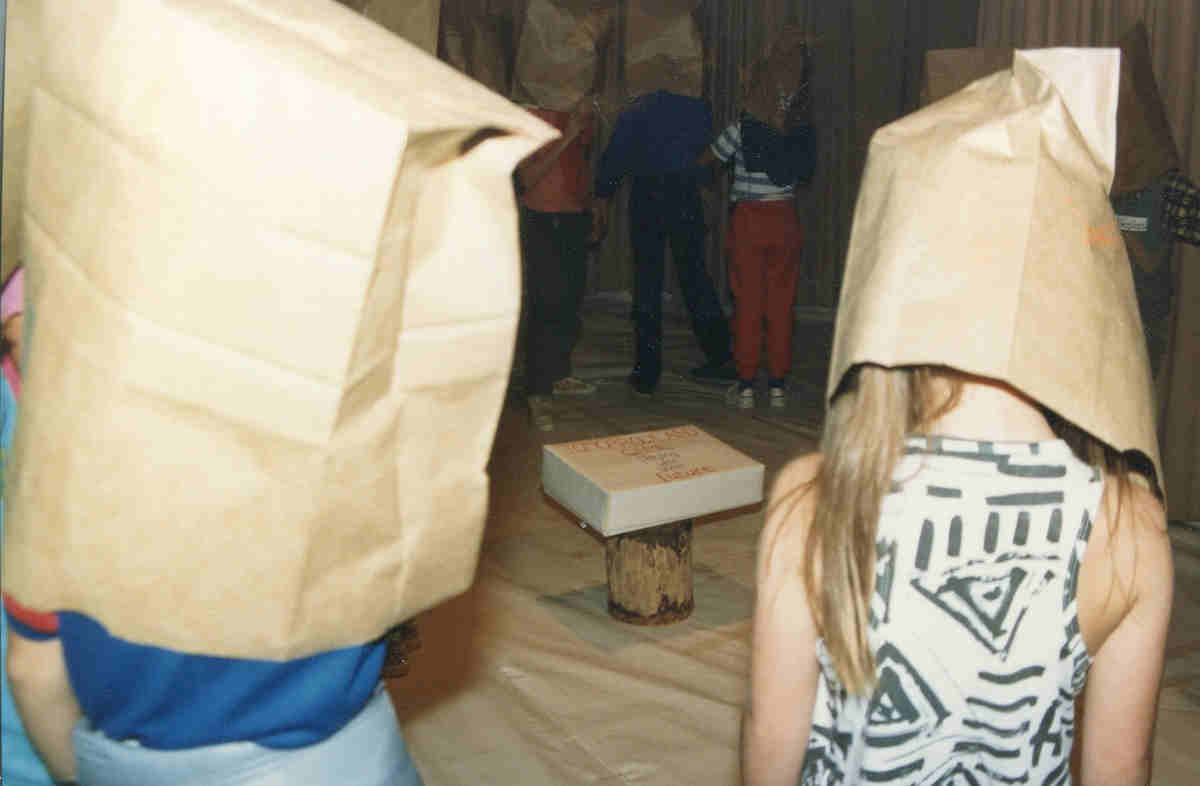 The Gambler professes 'ownership of the world', and challenges the passengers to play the ancient game of change, the I Ching, to 'win' the title deed to one of the environments glimpsed through the plane windows.

When each group's Title Deed is determined, the Gambler further challenges them to a game of skill which will require them to create a play that presents the group's ideas for sustainable development of that environment in the future, and perform it with puppets - or esle the deeds will revert to his possession and unbridled exploitation. 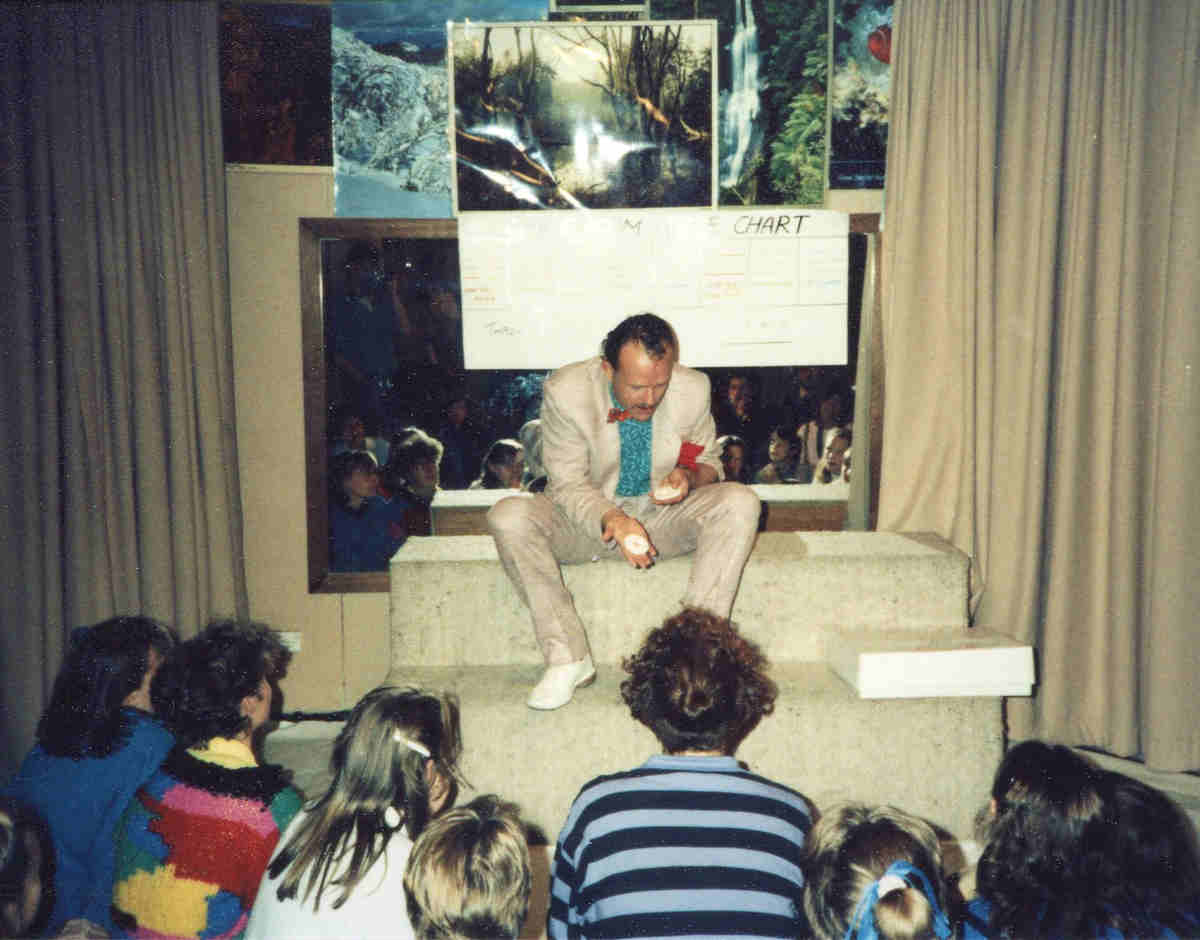 The Gambler rolls the dice for the Title Deeds to world environments.

The passengers discuss the issues and characteristics of their environmental deed with the Steward who leads them to seek help from Mr. Fix-It who introduces play-making guidelines, puppet making techniques and performance possibilities before they return to school and classroom development of their ideas and plans in preparation for their next visit to the Zoo.

Each group's winning selection became the topic for their dramatised puppet sketches developed in school classes and in puppet-making workshops on a second visit to the Zoo.

On their second visit to the Zoo, each group participated in a two-hour workshop led by Mr Fix-It and his assistants from Handspan who helped concepts turn into short plays and puppets to be made from recycled materials to represent the proposed characters and dramas. 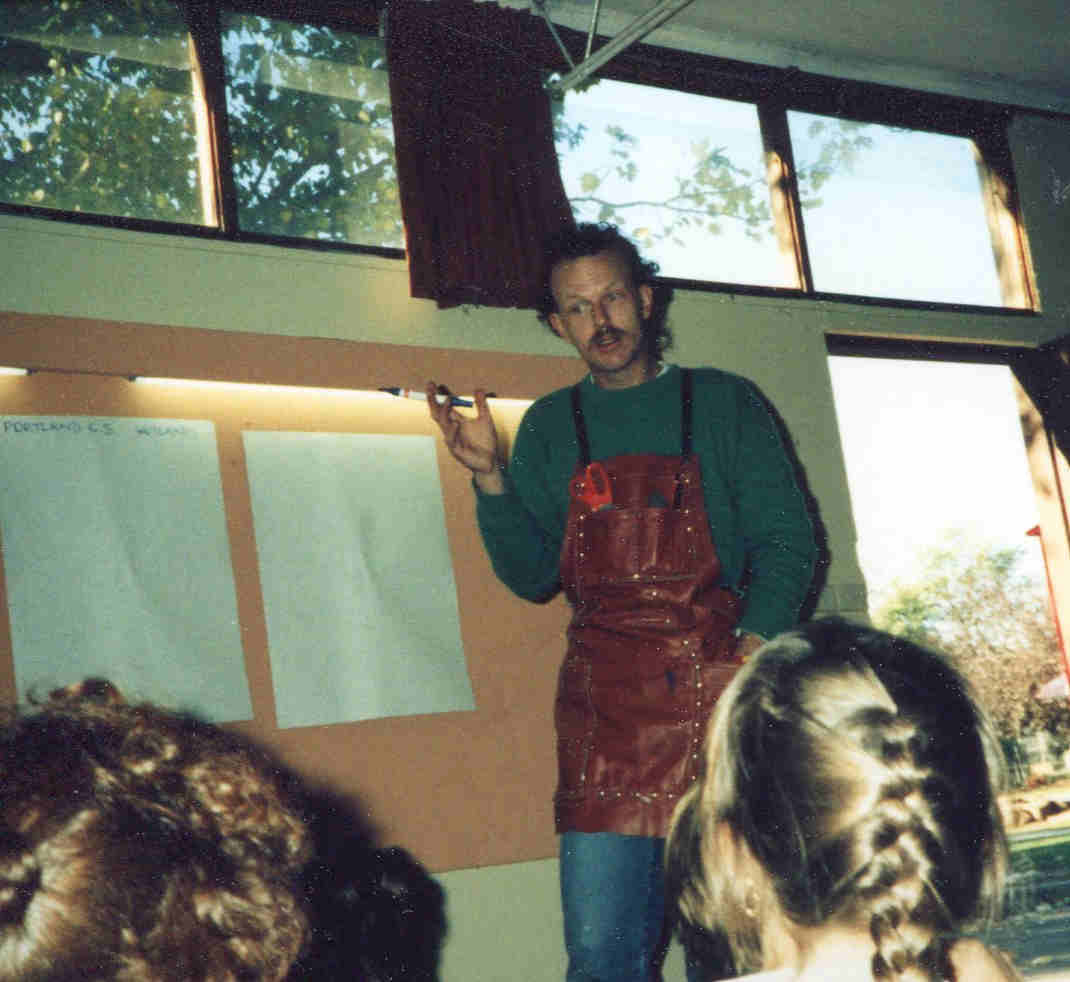 The school groups returned two at a time to the Zoo for a third and final half day visit which began with a parade of their puppets through the Zoo grounds accompanied by the Steward and Mr Fix-It as a public display of their work, and as encouragement to the Zoo animals that young people are concerned about the world ecological systems under threat.2

Each group ran a brief technical rehearsal of their play after the parade and performed their answer to the Gambler's challenge for each other and for him.

After seeing the plays, the Gambler is profoundly moved by the energy and intent of the Players who retain their deed, and are each given a replica mirror tile badge so they can help find more people who will help save the endangered species and habitats of the world.

Passing the Rivet Popper on the way out, they discover he is putting the rivets back in the plane after learning a few things from the arguments advanced in their plays.

Responses from the Zoo Education Service and from participating school were uniformly positive:

The approach we felt was an innovative blending of theatre, environmental and futures education It was based on the fundamental premise which explains habitat loss and endangerment - needs versus wants. In presenting this model, students can make their own assessments of where they fit into the needs versus wants balance. Ownership and commitment to the lifestyle choice then belongs to the individual concerned. No competition, no preaching but hopefully a real resolution of a serious environmental problem. The Melbourne Zoo School is indebted to Handspan Theatre Company for the success of The Tommorowland Game.

The children were highly motivated by the theatrical presentation and all entered into the fantasy involved. I feel the children are more aware of environmental issue and of the importance that their input will have in the future - a most professional production.

The mirror brooches have been a real hit, the children have been wearing them and have grasped a simplified version of their meaning. It is difficult to tell whether they have made any conscious commitments to conservation of our earth but I do know they have become more aware of the many issues which is a positive start. They've asked if they can visit the Zoo again and see Mr Fix-It!

Thanks for the wonderful Endangered Species Program. A number of the students felt it was the best excursion they have ever been on and they put a lot of effort into their puppets and performances. I think this was terrific!!


After the project was completed, Handspan discussed possibilities for repeating the program in the next year or two, but as the company headed into its major Bicentennial productions Waves of Change and Four Little Girls resources for another large scale residency project were unavailable, and Andrew Hansen himself was back on the road performing in both. Community puppet-making workshops in Castlemaine fed into Waves of Change but they were an extension of the company's residency in the town, rather than its focus.

Under David Baird's, Artistic Directorship in 1991-92, community and school residency programs were no longer a Handspan Theatre priority and in this absence, Andrew Hansen and Alison Bogg established an independent venture: Puppetree through which new residencies reached communities and organisations in Victoria, ACT and New South Wales until it was disbanded in the early 2000s.