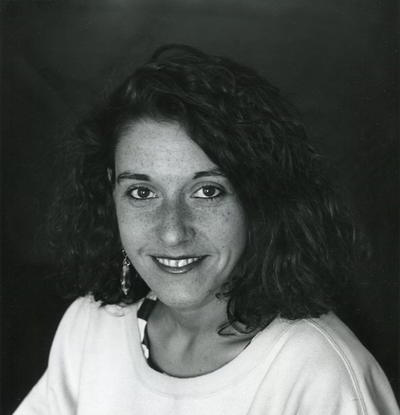 Carmelina, recently graduated from Rusden State College's drama-in-education training, came to Handspan in February 1980 - an auditionee for The Mouth Show.

She became a Handspan member from the outset and joined the official company membership when it was inaugurated in 1982. Married to Ken Evans in 1985, she remained an active participant in almost all Handspan productions until 1996.

Carmelina brought with her a passion to create theatre for social change and innovative theatre of integrity, particularly for young audiences. More interested in performing as an actor than as a puppeteer, she nevertheless became fascinated by the possibilities of visual performance. For more than a decade she was keenly involved and influential in Handspan's ambition to create work that mixed the strengths of both live performers and puppetry on stage.

Carmelina created 'The Fan Lady' in Nigel Triffit's work Secrets. Its tour to Spoleto, Italy in 1983 took her back to her own cultural roots where she found herself bridging both the language and cultural gaps for the ensemble, suddenly a significant facilitator in the new and exciting international festival touring experience. She returned to Melbourne with an added passion, to develop multicultural theatre, particularly from Italy and celebrate the migrant experience and its roots in Australia.

She also decided that she wanted a break from performance under a black hood. She rehearsed Lizz Talbot into Secrets and returned to creating work in a more hybrid mix that included text and live actors. In this quest, she brought Cho Cho San to the company through her Rusden associate, Geoff Hooke.

Carmelina was instrumental in creating many works produced by Handspan including those rooted in her cultural heritage, amongst them, Tutta Casa Letto E Chiesa (1985), A Change of Face (1986) and Dante - Through the Invisible (1996); The Haunted (1985), the company's indigenous cross-cultural exchange and theatre laboratory project; and in the role of Mexican Frida in Viva La Vida - Frida Kahlo.

She also created and performed in many seminal multicultural works outside Handspan such as Wogs Out of Work(1988), The Forty Lounge Cafe (1990) and Emma Celebrazione (1997) and in the film Big Mamma's Boy (2011). Her role in the Home Cooking Company's premiere production of Running Up a Dress 1 (1986), about mothers, daughters and sewing, obliquely inspired Handspan's work The Wooden Child (1990), about the relationship between fathers and sons.

At Handspan Carmelina participated in company decision making and management with an enormous loyalty and commitment that made her an integral part of its direction. She was also, and remains, a key facilitator of the Handspan family - a Network Queen

Since Handspan closed, her commitment to Melbourne's Italian community has seen Carmelina continue to create work with young and old including Oh My Papa (2001) and Ballo Liscio (2003) and her annual production around January 6th La Befana as well as many Italian-flavoured festivals. She is a story-telling environmental educator with The Connies Performance Troupe, loves to work as an emcee and continues to work as a passionate actor.