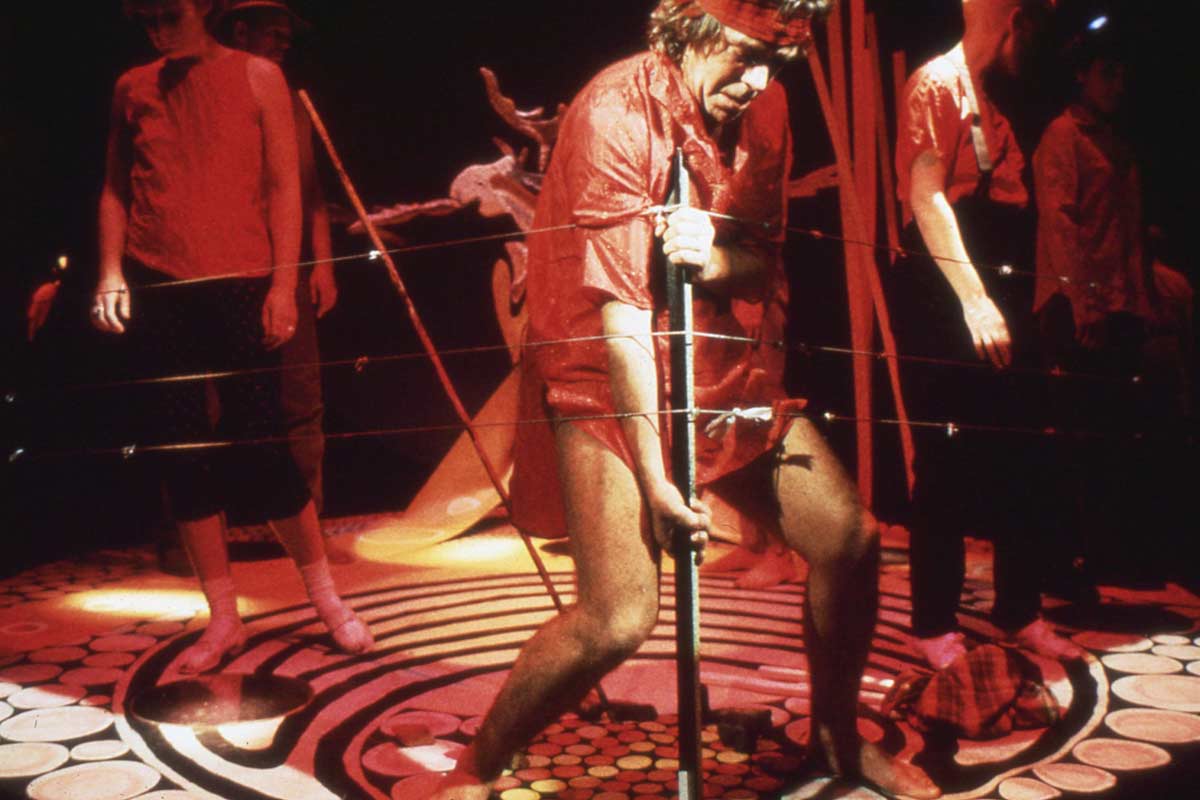 A fortuitous meeting 2 in Alice Springs between Ken Evans and Central Australian cultural advisor, Clive Scollay, led to the opportunity for the evolving work to be further researched in a cultural exchange residency at Angajta outstation in South Australia. It led too, to Handspan’s engagement of Peter Oyston to develop and direct the work through a 'Theatre Laboratory' experience based on Peter Brook’s methods that created The Conference of the Birds in Africa 3 , long admired by Handspan artists.

Guided by Clive Scollay, Handspan artists, Oyston and composer, Gregory Sneddon spent two weeks in Australia’s central desert, in June 1985 where Pitjantjatjara elders, Nganyintja, Ilyatjari and Tjilari shared their traditional culture, stories, bush tucker and inma at Angatja Outstation. The Elders generously gave the company permission to reference their stories, memories and landscape in the play, and record their voices and music for inclusion in its soundscape. 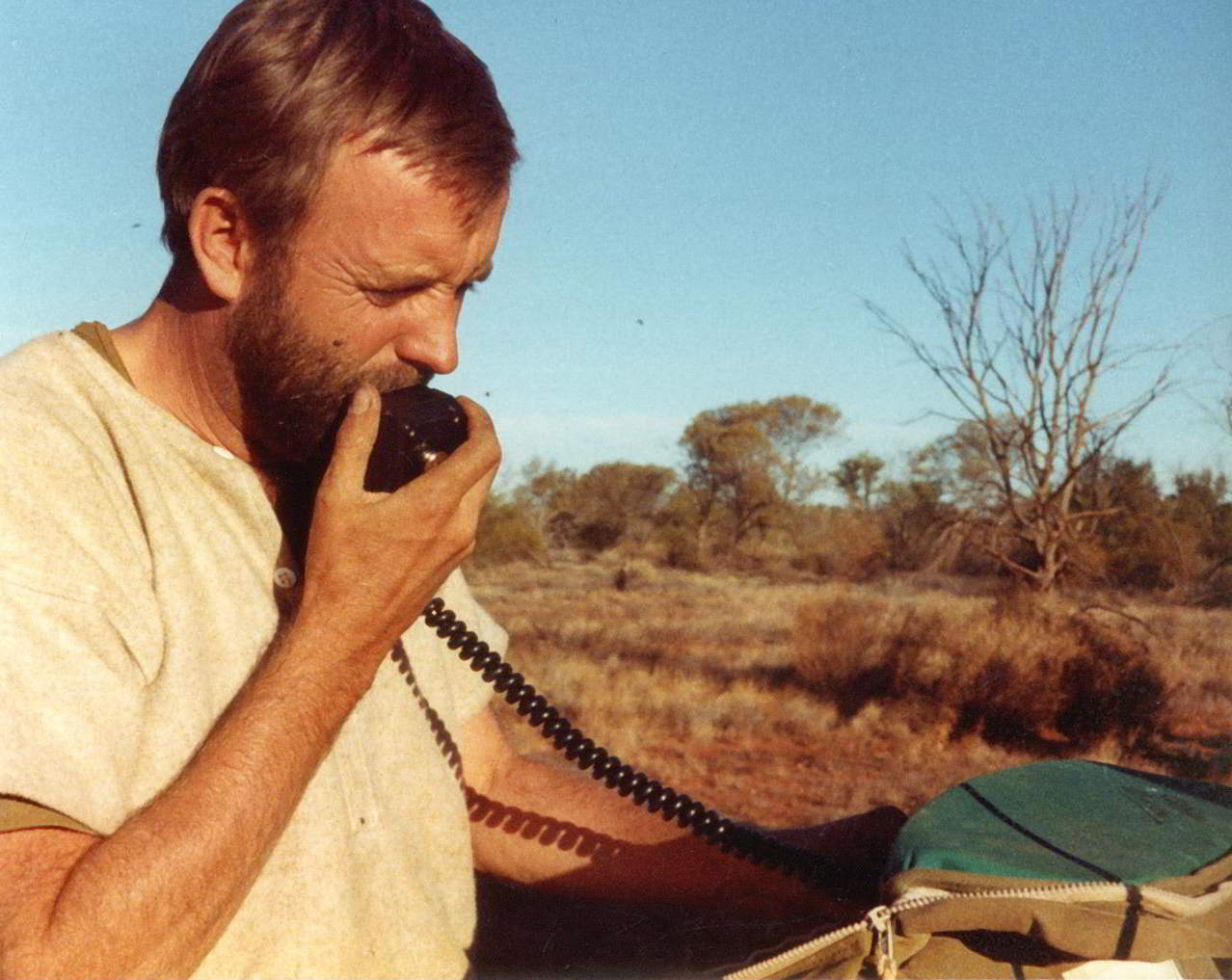 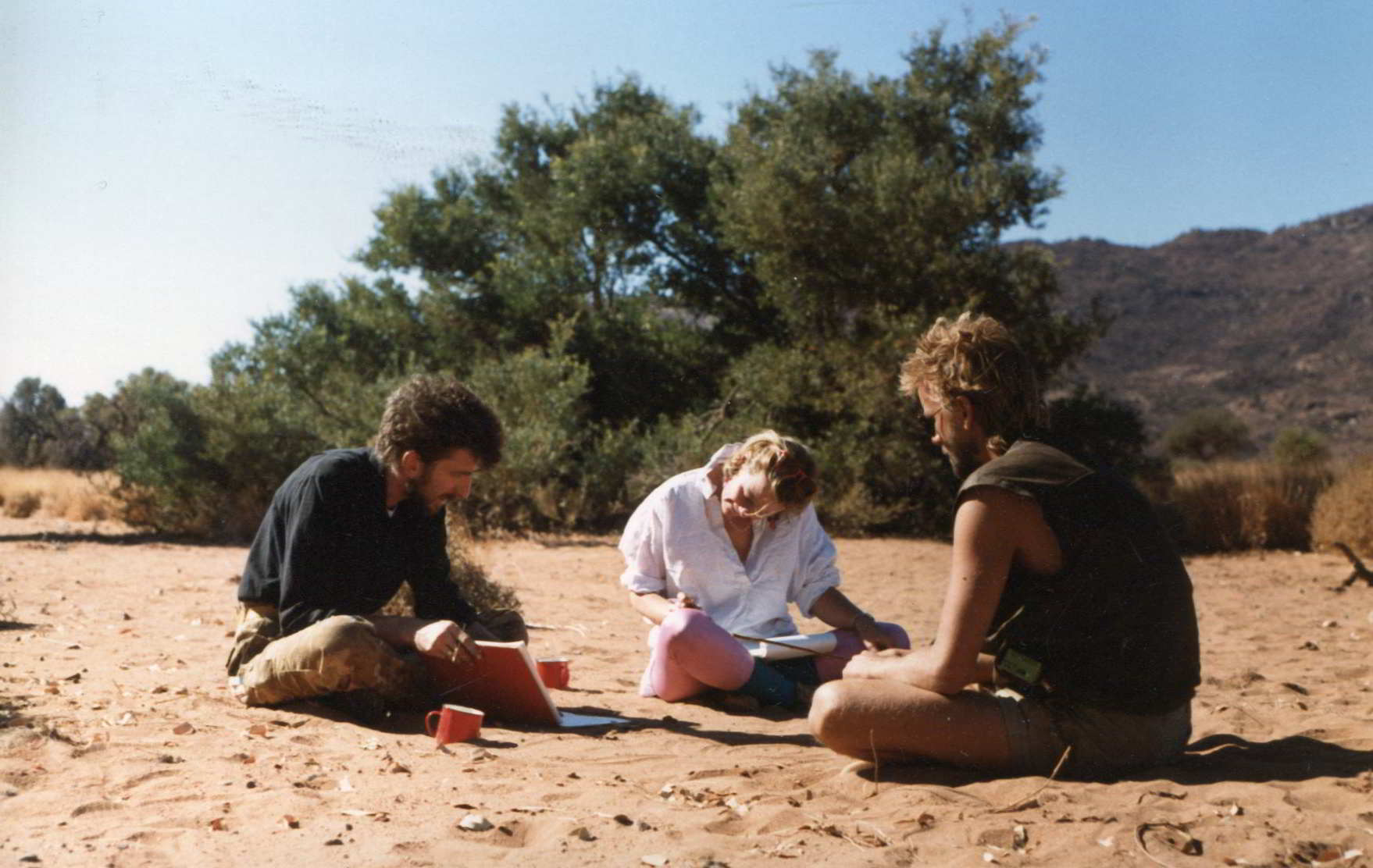 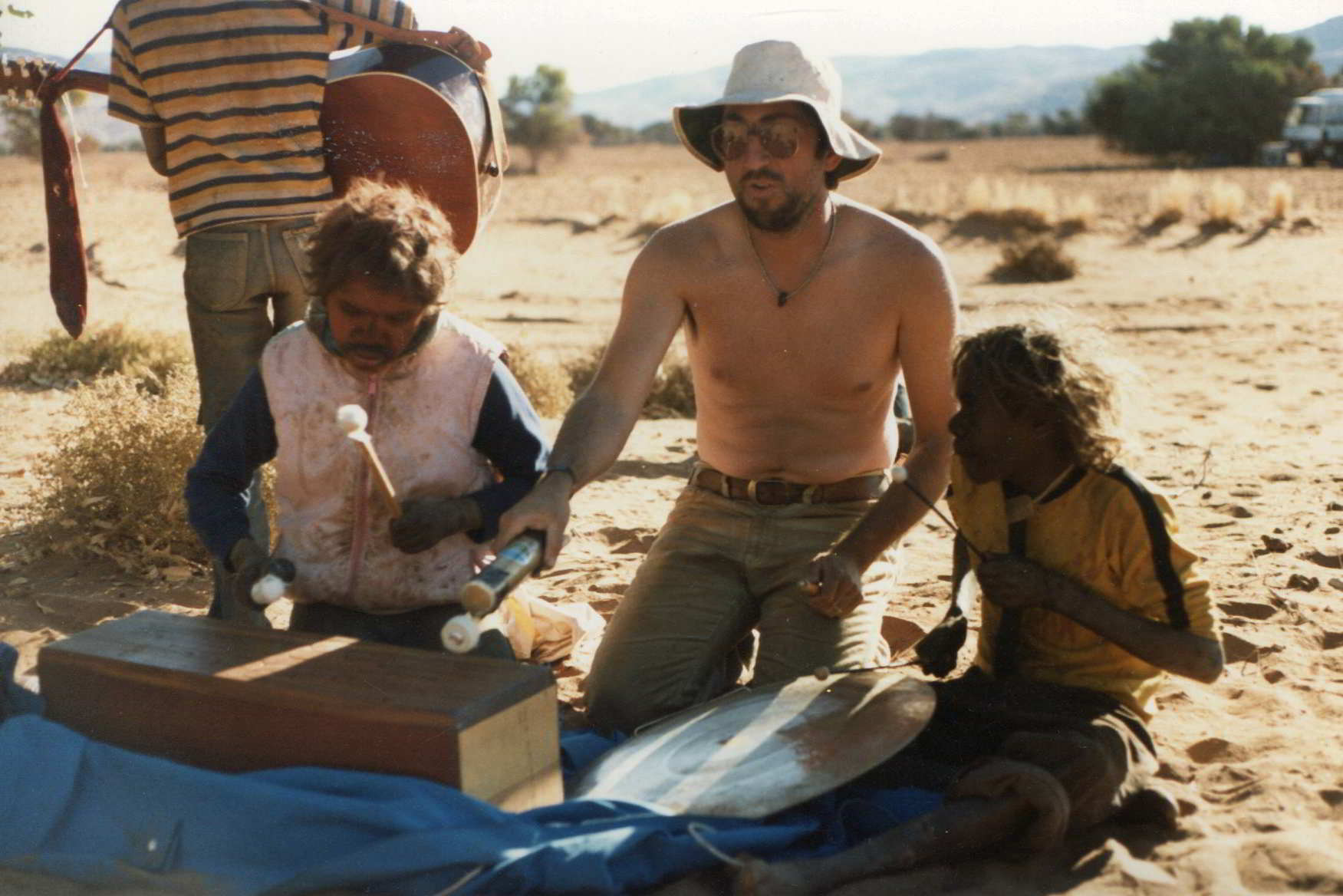 
During the residency, the company discussed and recorded their individual and collective responses to the landscape and the material and influences to which they had been introduced by their host community. Performance ideas were workshopped with Handspan's white generic Baby puppet 4 exploring the landscape and its unknown and ancient stories. (see also White Mother)

Peter Oyston developed the Theatre Laboratory framework for the desert residency. Isolated from the main camp, the performers. 'in character', spent 3 days and nights immersed in dramatic improvisation to explore their reactions to group survival in an unknown environment. Oyston dropped into the scenario from time to time to introduce stimulus directives for improvisation, and observed the 'living theatre' activity overtly and covertly throughout. This intense workshop informed the characters and narrative through line of the play. 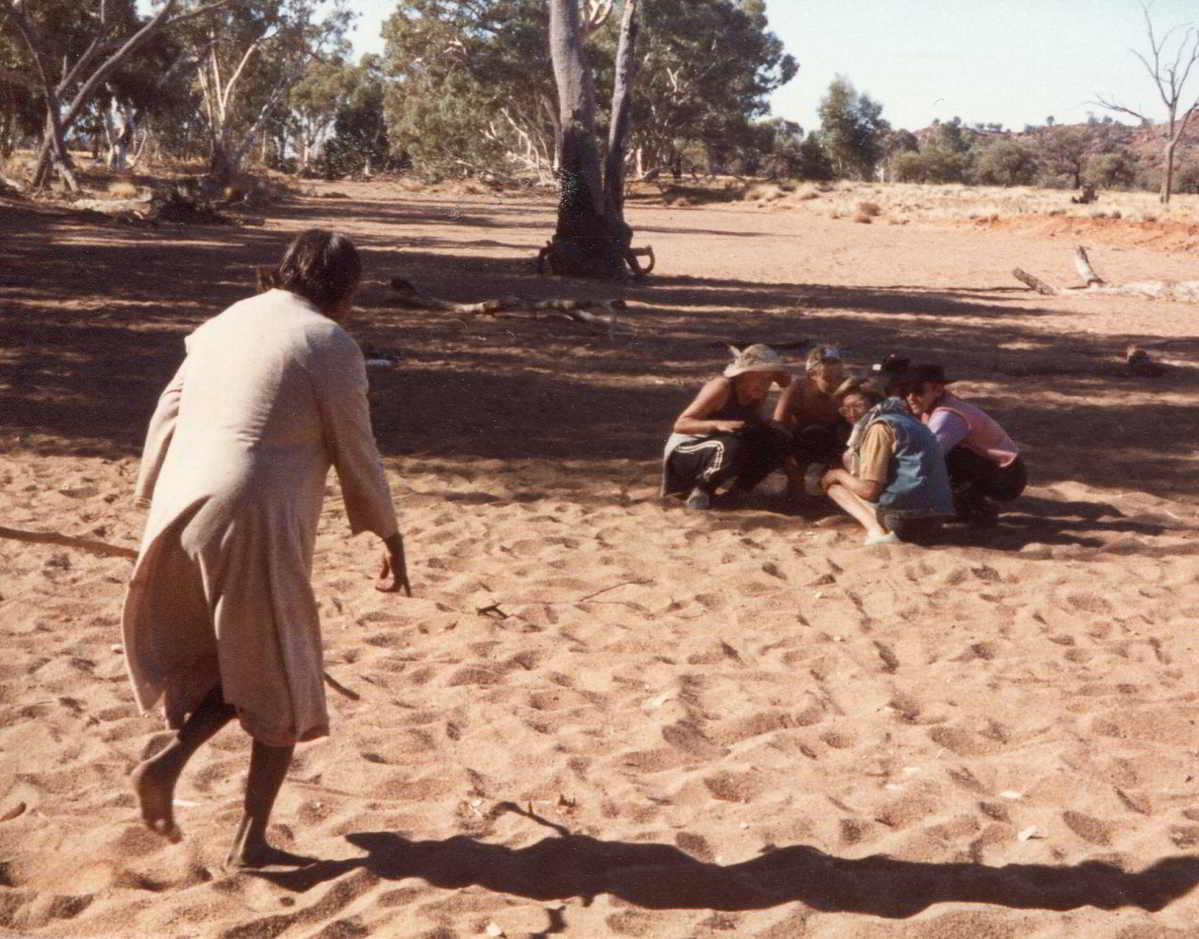 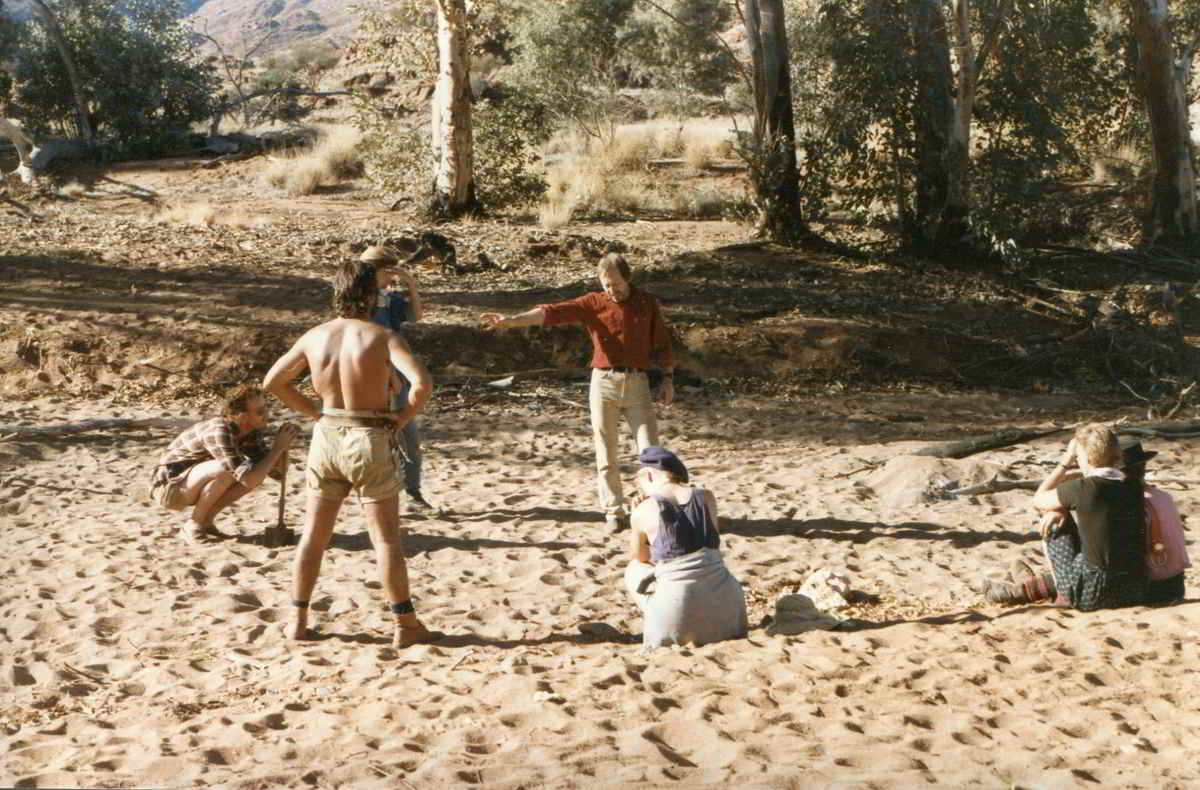 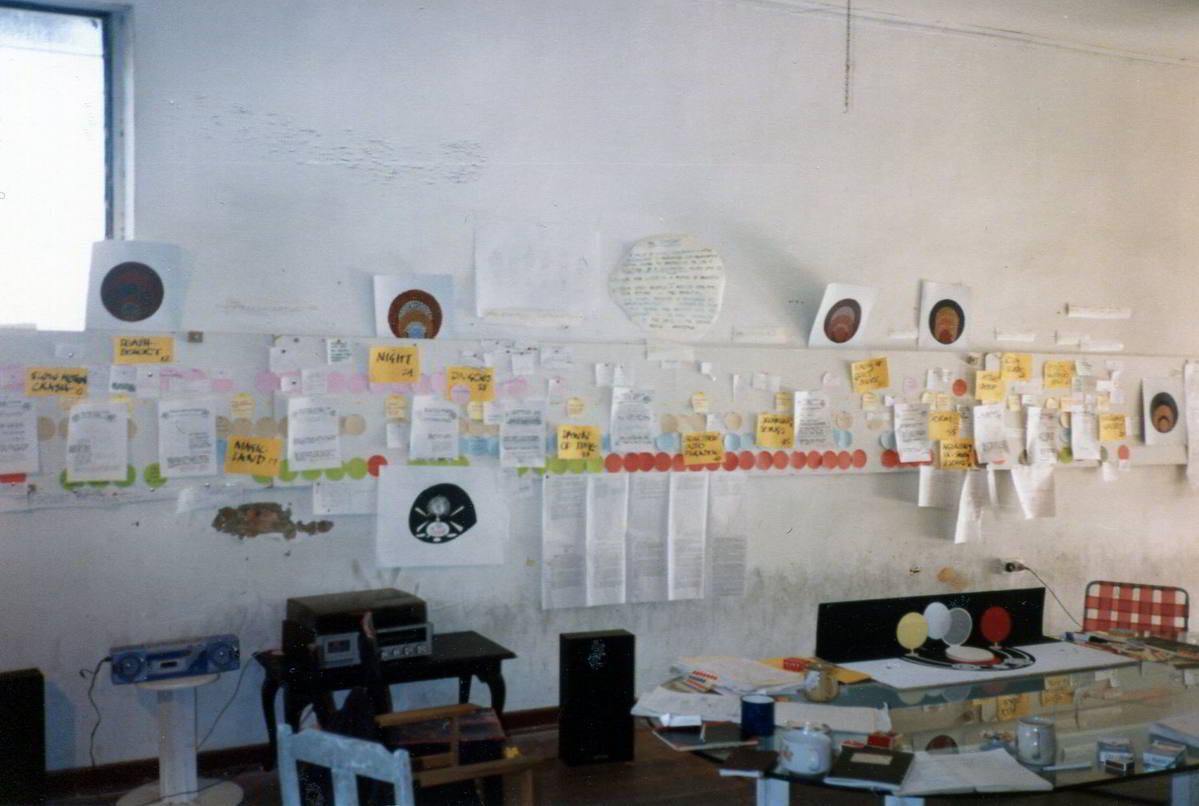 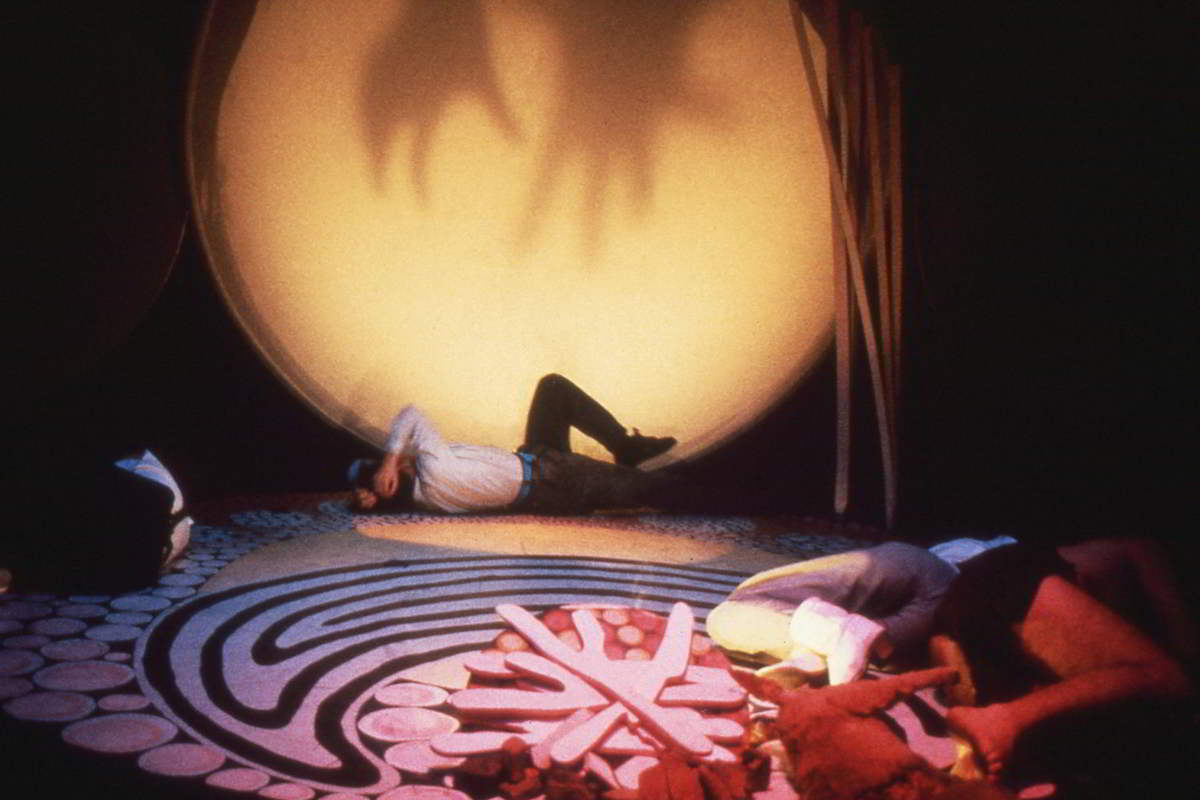 The creation and development of THE HAUNTED was an ambitious undertaking and one fraught with intensity, uncertainty and some confrontation. Oyston had little experience in theatre of imagery; Handspan artists had determination but lacked confidence in the narrative strength of their ideas; appropriate recognition of indigenous material was complex; the company ensemble expanded to include former Victorian College of the Arts students trained by Oyston, and although willing participants, they too were unversed in theatre of image; and the production timeline was incredibly short. See The Haunted Production Schedule 1985.

This is group theatre as one might guess from the shape, or shapelessness of the play. The goodie (I think) is Ian Mortimer and the baddie, Andrew Hansen. In such a production it is difficult to be sure …This exercise in historical and contemporary propaganda has a strangely miasmic effect. We are in the land of the spirits and although the symbolism is obscure, we gradually learnt to accept it ... Handspan is an adventurous company and this is an adventure.

The Haunted is an imaginative but not always clear or accessible cry of protest at the barbarity practised by the white settlers against the Aborigines...At the moment it is not so much a finished work as a first draft or work in progress.


By the time it opened in its second season in Alice Springs, attended by the Anangu community its had run in and evolved further:


The play’s unique design and poignantly haunting soundtrack were memorable and its concepts, unresolved though they may have been, were ground-breaking subject matter for the stage of its time.
-- 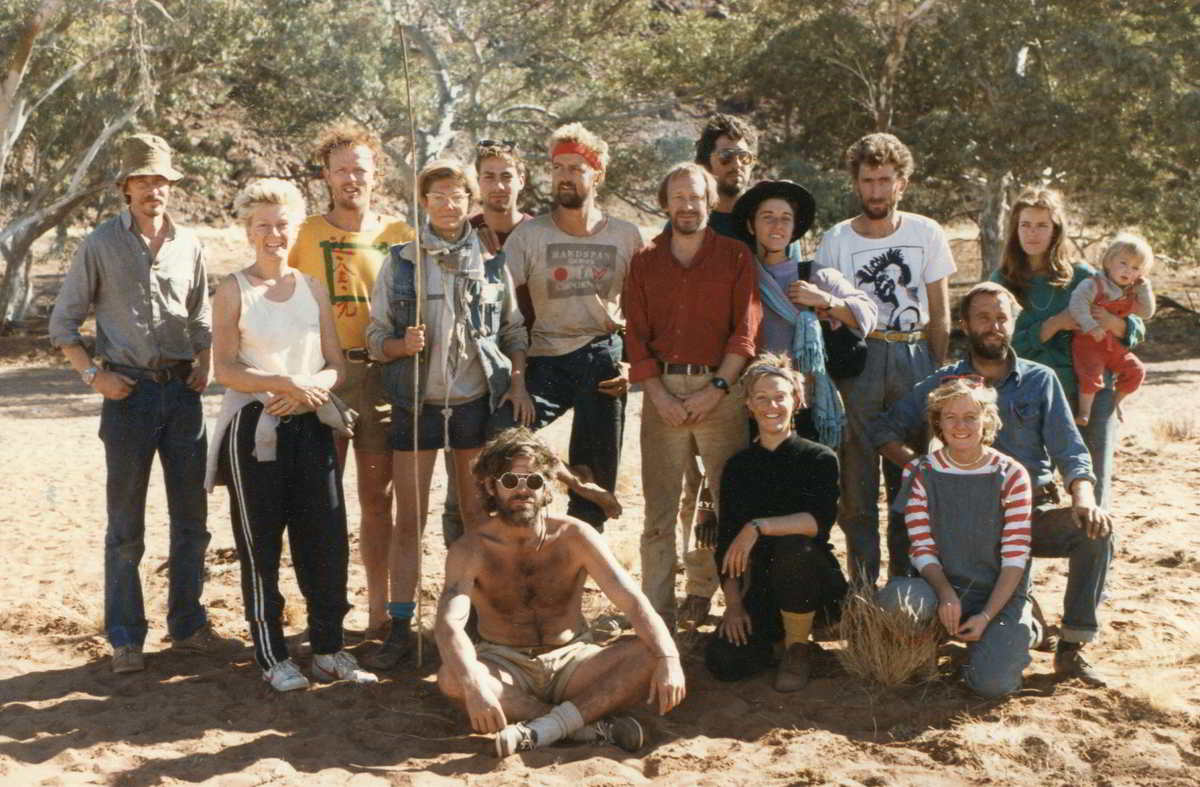